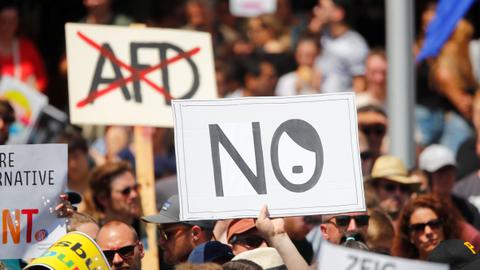 Why Germany needs to rein in the far right

Minorities in Germany have long complained of discrimination and outright racism, but recently leaked social media posts from a far-right political party paint a terrifying picture.

Leaked WhatsApp group chats belonging to the Alternative for Deutschland (AfD) party present a damning condemnation of German politics. While far-right sentiments have grown in Germany and across Europe in recent years, the country’s politicians have long had a laissez-faire attitude to an issue that could become a national emergency.

Rights groups noted a record number of far-right attacks on ethnic and religious minorities last year. According to the government‘s own statistics, 23,000 attacks by far-right extremists were recorded in 2020, almost 20% more than the previous year.

But the leaks also paint a very worrying picture for the government, as 76 of the AfD’s 92 MPs were also members of the WhatsApp group in question.

Among the topics discussed were “regime change” through economic collapse and calls for the “life imprisonment” of former Chancellor Angela Merkel.

But the AfD is no stranger to controversy; its leaders have a long history of controversial statements in the past, some bordering on criminality.

These leaked statements are a direct challenge to German democratic values. As German Foreign Minister Annalena Baerbock prepares to make an official visit to Turkey, Germans of Turkish origin live in fear of far-right attacks.

In a press release before departing on the trip, Foreign Minister Baerbock said: “A German heart and a Turkish heart beat in millions of people in Germany. Gone are the days when this was seen as a problem.

Her feelings may be sincere, but the picture of Germany she paints couldn’t be further from the truth. The Turkish Association of Germany repeatedly calls for equal opportunities, stricter laws against discrimination and better protection against far-right attacks.

One in five people in Germany are of immigrant background, and many openly express little or no trust in government institutions when it comes to being treated as equals with their white counterparts.

Mitigating the risk of far-right attacks poses a real challenge to the left-wing coalition government, which is under pressure to implement its 10-point action plan against the far-right.

But many observers of German politics say there are fears of a backlash from the far right that are clearly validated by the leaks – fears that deep political divisions where the far right is ready to use violence are plausible.

In 2019, a German politician who had spoken out in favor of bringing refugees to Germany was shot dead by a far-right extremist in his home. A few months later, in 2020, another far-right extremist shot and killed 11 people in the city of Hanau, with almost all of the victims being of immigrant background.

In politically divisive scenarios, it is often the most vulnerable in society who become easy targets. Fears that far-right political groups are becoming radicalized and taking violent action are fast becoming manifest realities.

Over the years, the German security services have, in several raids, recovered dangerous weapons – including various types of firearms and bomb-making equipment – from far-right extremists who had the intended to use them to incite civil war in Germany. Some of the most alarming arrests have taken place within the special forces of the German army.

During the Covid-19 pandemic, these political divisions have only deepened, with the far right accused of conspiracy theories and ill-informed opinions that have inspired and catalyzed hundreds of protests across the country calling at the end of all Covid-19 restrictions.

While the AfD has been outlawed as a “suspicious entity” by a German court and there are calls for it to be placed under scrutiny, the outlook for Germany’s domestic politics is bleak, with a an almost 30% increase in the cost of domestic gas and electricity, severe food inflation, rising fuel prices and sluggish overall economic growth, further calls on the government are likely.

While domestically the AfD’s policies threaten Germany’s historic political stability, on the European stage Germany’s influence has suffered some severe blows in recent years, the refugee crisis Syrians marking the beginning of the end of Germany. leadership in Europe.

Strong resistance from countries like Hungary and Poland to accepting Muslim refugees from Syria and Iraq has left Germany in an awkward position.

Many years later, the refugee crisis has subsided, but Hungary and Poland have still not been sanctioned or penalized, highlighting the decline of Germany’s power in Europe.

Germany’s attempt to mitigate the domestic risk of punishing Russia too harshly exposes its vulnerabilities to its European friends and partners.

German Chancellor Olaf Scholz was initially hesitant to send military aid to Ukraine, citing negative consequences for his country, such as the immediate cessation of access to all Russian gas, which is a lifeline for Ukraine. German industry.

As eastern EU member states such as Latvia and Poland feel the heat of war in Ukraine, many are taking note of Germany’s reluctance to deal harshly with Russia. And according to some analysts, Germany’s willingness to pay for Russian gas in rubles further jeopardizes Germany’s reputation.

This chasm also affects Germany’s influence in countries that are out of step with the EU on other issues.

For example in Poland, judicial reforms rejected by the EU as “undemocratic” have inadvertently blocked billions of euros in EU funding to Poland. Germany would previously have had a seat at the table to resolve these issues, but with Poland feeling under pressure due to Germany’s weak response to Russia, it would be difficult for German officials to take a high moral stance. or to have enough political capital to convince Warsaw to abandon the controversial reforms.

Hungarian President Viktor Orban has expressed interest in increasing Russian gas imports into the country. But a weak German response to Orban’s shift to far-right politics in the recent past has allowed him to make decisions that deviate from EU policy guidelines.

Any future attempt by the EU to force Hungary away from its economic dependence on Russia will invariably result in Hungary claiming that it was just following the path set by Germany.

Disclaimer: The views expressed by the authors do not necessarily reflect the opinions, views and editorial policies of TRT World.

Ryan Kelley fans cheer after his release on Bond