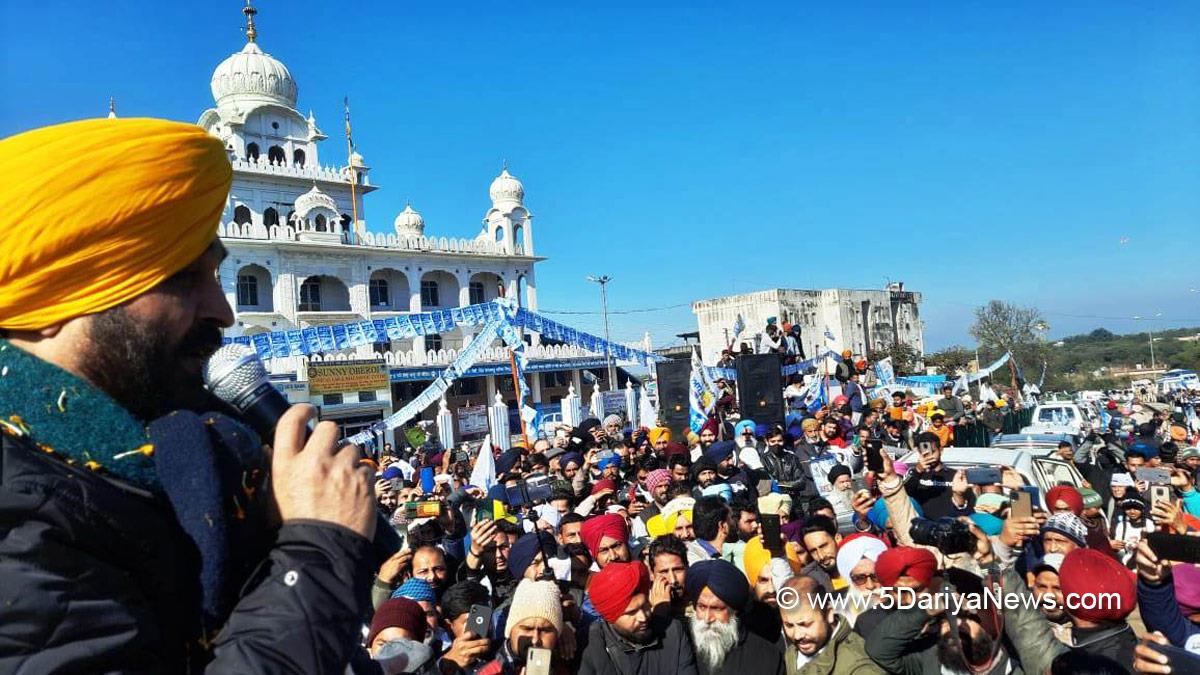 We must protect Punjab and Punjabi, not us: Bhagwant Mann

The Aam Aadmi Party (AAP) Punjab Chief Minister’s candidate, Bhagwant Mann campaigned in different villages in Anandpur Sahib Assembly Constituency as part of “Mission Punjab 2022”. The people of Anandpur Sahib enthusiastically welcomed Mann with flowers and garlands and wished him success. AAP supporters marched in large numbers with Mann’s convoy and waved Zindabad slogans. Bhagwant Mann addressed the rallies and urged people to support the Aam Aadmi party. On Saturday, Mann visited Bharatgarh, Nangal Truck Union Chawnk and Gohalani village of Anandpur Sahib assembly constituency and interacted with people there. Mann called on the people to support the Aam Aadmi Party to bring about political change in Punjab and promised that with the formation of the AAP government in Punjab, the problems of ordinary people would be solved.

Speaking to reporters during his election campaign, Mann reacted to his refusal of the extra security offered to him by the government and said that I was not worried about my safety. We must protect Punjab and the people of Punjab. I will not take any special protection until three million people of Punjab and the holy books of all religions are protected. I am an ordinary man. I don’t need high level security. That’s why I refused the additional security. Mann said that today people in Punjab do not feel safe. Our priority is to make people feel safe by improving the state of the security system. We must secure Punjab and Punjabis. In his address to the assembled audience, Mann said that today there is a huge shortage of police personnel at police stations and checkpoints, but there is a significant deployment of police to protect leaders and ministers. Police personnel are engaged in the protection of deputies-ministers, their homes, children and families. The rulers of previous Punjab governments have deployed large numbers of police for their own security by keeping people’s safety at a distance. In the AAP government, the police will only do the work of the police. They will be withdrawn from the safety of the rulers and deployed into the safety of the people. The AAP government will give freedom to the police to maintain law and order and all unnecessary and political interference in the work of the police administration will be stopped.

Speaking on the issue of sacrilege, Mann said that due to weak and incompetent Congress government, many incidents of sacrilege have taken place in Punjab in the past. The law and order situation in Punjab has completely collapsed due to the struggle between the Congress leaders for power and the people of Punjab have to bear the brunt of it. Instead of working for the people, congressional leaders and ministers fought each other for power for five years. If the culprits had been severely punished in previous cases of sacrilege, then today no one would have dared to commit sacrilege again. But like the Badal-BJP government, the Congress government used the issue for political gains instead of punishing the culprits. Mann promised that the Aam Aadmi Party government would punish all culprits and masterminds most severely by conducting a fair investigation into all cases of sacrilege, shooting and bomb blast and maintain peace and harmony in Punjab. . Mann said that today the people of Punjab are most troubled by corruption and mafia. The government-sponsored sand mafia, drug mafia and cable mafia have ruined people’s lives. In the governments of Badal and Congress, the Mafia dominated and the Mafia bosses ran illegal businesses together. Leaders facing Mafia allegations were part of the cabinets. The Aam Aadmi Party government will completely eliminate corruption and all kinds of mafia in the governance system, save the people from mafia and corruption and lead Punjab to the path of development.

A judge awarded a 35-year-old man who had filed for bankruptcy $100,000 in school loan forgiveness

6 new Assembly segments in Jammu, one in Kashmir: The Tribune India