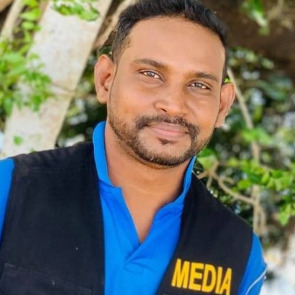 On September 2, 2022, human rights defender and journalist Selvakumar Nilanthan was ordered to report to the Counter Terrorism Investigation Division (CTID) headquarters in Kirulapone, Colombo on September 14, 2022 to question him about his alleged support for the former Tamil armed group. separatist group, the Liberation Tigers of Tamil Eelam (LTTE).

Selvakumar Nilanthan is a human rights defender and freelance regional journalist based in Batticaloa, Sri Lanka. He is secretary of the Batti Press Club and was a member of the Batticaloa District Youth Club. He has actively spoken out against social, political and environmental injustices in the Eastern Province. He defended human rights and wrote several press articles for Tamil newspapers. Because of his legitimate human rights activism and journalism, he was targeted by Batticaloa police, summoned for questioning, and received several court orders restricting his right to protest.

In May 2022, Selvakumar Nilanthan was targeted online. Photos of his family members, including his children, were posted on Facebook in an effort to tarnish his image and credibility as a journalist. In response, he wrote to the Batticaloa Deputy Superintendent of Police asking him to take appropriate action against online violence and attacks.

On February 9, 2022, Criminal Investigation Department (CID) officers interrogated Selvakumar Nilanthan for two hours at a police station in Eravur, Batticaloa district. He was questioned about his personal and professional background and his ties to the Liberation Tigers of Tamil Eelam, as well as to diaspora media outlets. He was also questioned about his work with the Batticaloa District Tamil Journalists Association. On July 12, 2021, Selvakumar Nilanthan was interrogated on the same issues by the Batticaloa Police Terrorism Investigation Division, which also demanded his Facebook, WhatsApp, email and bank account login details.

In January 2020, leaflets with death threats to seven Tamil journalists from Batticaloa district, including Selvakumar Nilanthan, were placed at the Batticaloa Press Club headquarters. Journalists suspect that these threatening leaflets were left under the door. The translation of the text printed on the leaflets reads: “Warning! To be aware!! It was the Reporters who received money from the Tigers abroad and who worked against the government. Give them the death penalty soon! “. The photo on the leaflets is from an event Batticaloa journalists organized on January 9, 2020 to commemorate the 11th anniversary of the murder of Colombo-based journalist and editor Lasantha Wickramathunga.

Sri Lanka has a history of targeting and attacking peaceful human rights defenders and journalists for their human rights work and advocacy. People working in war-affected areas in the northern and eastern provinces of the country and belonging to religious and/or ethnic minorities are particularly vulnerable to threats, intimidation and legal reprisals. Front Line Defenders has repeatedly called for an end to reprisals and for the protection of human rights defenders and journalists in Sri Lanka.