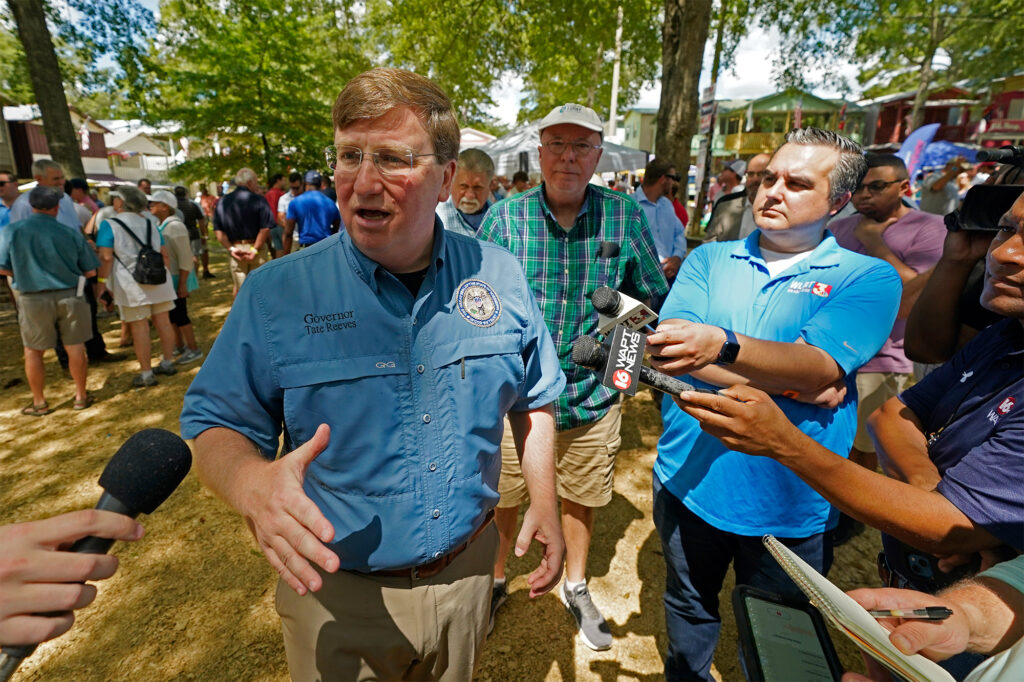 Before the state fired him from leading the civil investigation into Mississippi’s sprawling welfare fraud case, attorney Brad Pigott was too “focused on the political side of things,” says Republican Gov. Tate Reeves to reporters at the Neshoba County Fair on Thursday.

On July 22, Pigott said Mississippi Today reporter Anna Wolfe that he believed political actors had him fired because he was ‘trying to find out the truth’ about how $5 million of TANF money was used to build a volleyball stadium at the University of Southern Mississippi. Pigott, whom Democratic President Bill Clinton once appointed as U.S. Attorney for the Southern District of Mississippi, said he was sure the state “could find a loyal Republican attorney to do the job.”

In a statement after Pigott’s dismissal, current MDHS Director Bob Anderson said Pigott had “made a good start in moving the litigation forward” but had since “made decisions regarding the litigation and filed of procedure without any prior dialogue with the officials of the MDHS”.

“Although the USM Athletic Foundation is not yet a party to this matter, Brad Pigott issued a detailed subpoena to this entity without any prior discussion of the matter with MDHS,” said Anderson, who Reeves nominated in 2020.

July 23, Mississippi Today reported emails this shows that Pigott had sent a draft copy of the subpoena to the MDHS General Counsel and the Mississippi Attorney General’s Office. Governor Reeves’ office said in a statement that it “has worked closely with DHS throughout our efforts to recover the fraudulent expenses” and that “it has included discussions of the decision not to extend the Brad Pigott contract”.

Reeves also claimed that “there are outlets that just made things up about why it wasn’t renewed”, Y’all Politics reported. The governor also said the state doesn’t “need a lawyer who is focused on trying to be a confidential informant or a source for a leftist blog,” apparently referring to Mississippi Today.

Mississippi Today did not disclose the sources of the leaked text messages and other related materials it published, including whether or why anyone associated with the defendants or the prosecution provided the information.

(Editor’s note: Pigott has previously donated to the nonprofit that publishes the Mississippi Free Press, which does not influence news coverage and newsroom picks.)

“The wrong person to represent taxpayers”

“The manner in which the lawyer has acted since his contract was not renewed has proven to many people why he is absolutely not the right person to represent the state,” WLBT reported said the governor. “He’s not the right person to represent the taxpayers because he’s much more interested in following a political angle than focusing on what’s best for the state. … He seemed far more interested in getting his name printed and hopefully bigger than any Mississippi story. He wants to go national.

The attorney did not respond to multiple requests for comment from the Mississippi Free Press. After Pigott’s dismissal, an attorney for defendant Nancy New issued a subpoena for Bryant to hand over documents related to the volleyball stadiumclaiming he had ‘no faith’ that the state would ‘pursue the evidence wherever it leads’ and vowed to ‘find the truth, even if we have to drag it out kicking and screaming in the light”.

Nancy New was running the nonprofit Mississippi Community Education Center when it received the TANF funds and directed them to various projects. This included sending $5 million to the USM Athletic Foundation, of which she served on the board, to fund the volleyball stadium. She and her son, Zach New, previously pleaded guilty to multiple state chargesincluding bribery and wire fraud as part of a plea deal with state prosecutors (The News face separate federal charges for allegedly using $2 million in public education funds for a private school; the state plea agreement does not affect the federal case). Although TANF’s federal block grants give states broad discretion over their spending, they cannot be used for “bricks and mortar” construction projects under state law.

In his April 22, 2022 plea agreement, young New said that in July 2017 he “acted with” his mother, former Mississippi Department of Human Services Director John Davis “and others, under their direction, to disguise the construction of the USM project as a “lease” as a means of circumventing the Strict Limited Purpose Grant prohibition against “bricks and mortar” construction projects in violation of Miss. Code Ann. 97-7-10.”

During his tenure as governor, Bryant had close ties to Nancy New and he celebrated the launch of Families First For Mississippi, an offshoot of MCEC, with her in 2016. Prosecutors have not charged the former governor with wrongdoing in the ongoing investigation.

In April, Wolfe obtained from an anonymous source, then reported on a 2018 text message in which Brett Favre allegedly told an acquaintance, Jake VanLandingham, that Nancy New “has strong connections and gave me 5 million for installing Vball via a grant”. VanLandingham is the founder of a pharmaceutical startup called Prevacus in which Favre had invested. Bryant and Favre sought to bring the business to Mississippiand the state says Prevacus received $2.1 million in TANF funds under the MDHS plan. Prosecutors have not charged Favre, Prevacus or VanLandingham with any foul play.

Auditor: “Firing Pigott is a mistake”

Mississippi State Auditor Shad White, who first took office as a Bryant appointee, began his investigation of MDHS and the News after the then governor. Bryant turned over information he received about alleged wrongful spending in July 2019. The auditor provided information to state and federal prosecutors, and Hinds County District Attorney Jody Owens arrested Davis , the News and three others in February 2020. Davis has pleaded not guilty on multiple occasions. state charges in the welfare scandal, but faces years in prison.

Auditor White, who is a Republican, criticized the MDHS decision on July 23, saying “to fire Pigott is a mistake.”

“From the beginning of this case, I said it was important that a bipartisan team look into this case,” the listener tweeted. “That’s one of the many reasons I gave our findings to the Hinds Co prosecutor, who is a Democrat. I also, of course, gave everything to the FBI. Pigott worked well with my office, communicating regularly with us about the status of the case and how we could share information.

When reporters asked Reeves about the auditor’s remarks, the governor said he “couldn’t be too concerned about what the state auditor said.” WLBT reported.