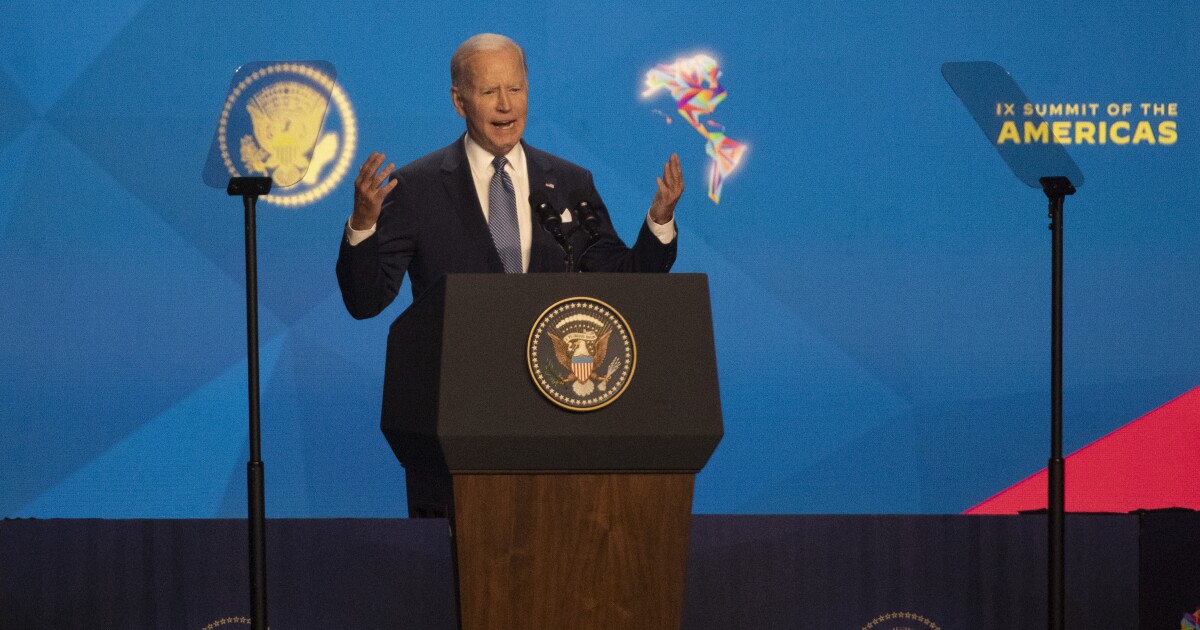 No nation should bear sole responsibility for managing a historic increase in migration in the Western Hemisphere, President Biden said Friday as he and 19 of the region’s leaders and their representatives signed a long-awaited pact to expand the legal pathways for migrants and refugees and provide new funding to help countries welcome them.

“Each of us is signing pledges that recognize the challenges we all share and the responsibility that impacts all of our nations,” Biden said as he joined a group of regional leaders to sign the so-called Los Angeles Declaration.

2:20 p.m. June 10, 2022An earlier version of this article stated that Bolivian President Luis Arce had publicly criticized the Biden administration’s decision to exclude certain leaders from the Summit of the Americas. It was Belize Prime Minister John Briceno who criticized the decision.

Signatories to the accord, announced on the final day of the Summit of the Americas in Los Angeles, included Mexico, El Salvador, Guatemala and Honduras – four countries whose commitments were in doubt after their leaders boycotted the conference over to the American decision to exclude several countries which it considers to be undemocratic.

Mexico is a key player in the region and its cooperation is essential to stem the flow of migrants to the United States, while the three countries of the Northern Triangle of Central America – El Salvador, Guatemala and Honduras – produce a large part of the region’s migrants.

Although the absence of their leaders cast doubt on the scope of the migration talks at the summit, Biden administration officials have argued that the pact will include a diverse group of countries dealing with the influx of migrants in Latin America.

Migration patterns in the Western Hemisphere have changed as the region grapples with a pandemic-fueled economic crisis, exacerbated by political upheaval, violence and environmental disasters. Biden pointed out that millions of migrants who fled Venezuela now represent up to 10% of Costa Rica’s population.

“[Our] economic futures depend on each other…And our security is intertwined in a way that I don’t think most people in my country fully understand – and maybe not in your countries too,” said he declared.

The pact includes commitments from Mexico to launch a temporary work program for 15,000 to 20,000 workers from Guatemala. The country will expand eligibility for this program to include Honduras and El Salvador “in the medium term,” according to a fact sheet provided by the White House.

The Biden administration plans to distribute $314 million in humanitarian aid, funded by the U.S. Agency for International Development and the State Department, as well as providing billions in funds from the existing development bank to help promote new reception programs for migrants and refugees in countries such as Ecuador and Costa Rica.

“If you prey on desperate and vulnerable migrants for profit, we come for you. We are coming after you,” he warned.

Other countries will also take action to deal with the increase in the number of migrants heading to the United States. US border officials encountered more than 1.7 million migrants along the US-Mexico border from October 2020 to September 2021, and an additional 1.3 million from October 2021 to April, according United States Customs and Border Protection.

Canada will also provide $26.9 million for the 2022-2023 fiscal year for migration management and humanitarian assistance, and Spain is pledging to double the number of labor pathways for Hondurans.

In an email, Theresa Cardinal Brown, managing director of immigration and cross-border policy at the Bipartisan Policy Center, a Washington-based think tank, called the statement a “big deal” that “shows how the issue of migration is important for many countries”. in the western hemisphere, not just in the United States.

“If it was just about us, it wouldn’t happen,” she wrote.

But she warned of challenges ahead in working out the details and implementing the declaration’s provisions.

“Our immigration systems are already overloaded and overloaded – everything from border operations to [U.S. Citizenship and Immigration Services’] legal asylum and visa applications, immigration courts, overseas visa offices, all have significant delays with no end in sight,” Brown wrote. “We have to solve this problem to make all of this achievable in the short term.”

The statement caps a week of meetings between foreign dignitaries, advocates and more than 20 heads of state, who gathered in Los Angeles to discuss regional challenges including the COVID-19 pandemic, climate change, inequality economics and migration.

Diplomatic fissures over the Biden administration’s decision to exclude the leaders of Cuba, Nicaragua and Venezuela have shattered the summit, which is being held in the United States for the first time since its inaugural meeting in Miami in 1994.

On Thursday, the leaders of Belize and Argentina publicly criticized the U.S. decision to sideline some regional leaders as Biden and Vice President Kamala Harris watched. Belize Prime Minister John Briceño called the absence of some leaders “inexcusable”.

The migration pact also includes a commitment from the Biden administration to resettle 20,000 refugees from the Americas over the next two years, and a plan to resume family reunification parole programs in Cuba and Haiti in the coming months. , which allows U.S. citizens and permanent residents to apply for parole for family members in those countries.

The statement also commends the efforts of Colombia and Ecuador, which have adopted policies to accommodate some of the more than 6 million Venezuelans who have fled their country in recent years. Colombia pledges to legalize permits for an additional 300,000 Venezuelan migrants and refugees by the end of August.

Ecuadorian President Guillermo Lasso, who hailed the “political will” of heads of state and delegations participating in the deal, said it was important to promote development opportunities in migrants’ countries of origin and refugees in addition to helping host countries.

Savi Arvey, policy adviser with the migrant rights and justice team at the Women’s Refugee Commission, said the declaration had “positive first steps” and that advocates hoped participating countries would give back. following their commitments.

“These are good first steps, but as countries work together, we hope for bigger and bolder action, especially on international protection,” she said.

Louis DeSipio, a UC Irvine political science professor and immigration scholar, said labeling the declaration of migration as a regional challenge and responsibility is both symbolically and substantively important.

It “has the potential to slowly reshape medium- and long-term migration patterns in important ways,” he said.

But DeSipio believes that while the statement outlines a multilateral and regional approach to migration, rather than the bilateral and largely piecemeal strategies of the past, in the short term it “is likely to be of little comfort to Latin American migrants in the United States. “. and their family members trying to migrate to the United States”

“President Biden’s support here is primarily financial, but several Latin American leaders are making substantial contributions by creating new opportunities for migration,” DeSipio said. “Over time, if these early efforts are successful…it could lay the groundwork for more routine labor migration in the Americas, or at least South America.”

Since Biden took office, he has struggled to deal with the national backlash over a record surge in the number of migrants at the US-Mexico border. Republicans have taken up the issue to portray him as weak on border security, while progressive Democrats have been frustrated by what they see as a lack of progress in implementing stronger immigration policies. human.

Tyler Mattiace, a researcher in the Americas division of Human Rights Watch who closely followed the process of drafting the declaration, said this kind of multilateral approach is long overdue to help “the millions of people across the continent who have fled their homes because of violence or persecution or human rights violations.

“They often face serious abuse which is often the result of the government either trying to prevent them from seeking protection or[s] it is difficult for them to obtain legal status or implement enforcement strategies to get them to take dangerous migration routes where they face abuse,” Mattiace said.

He said the statement was a departure from what is happening on the ground at the U.S.-Mexico border, where immigration enforcement officials continue to deport asylum seekers under the title 42, a COVID-19 health measure implemented under former President Trump and maintained by Biden. The measure is blocked in court.

“The statement is a big step forward, but it may mean nothing unless Biden immediately does all he can to restore access to asylum at the U.S. border and end other abuses. other anti-immigration policies,” Mattiace continued. “The United States must also stop focusing immigration policy on efforts to outsource immigration enforcement to other governments in the region.”