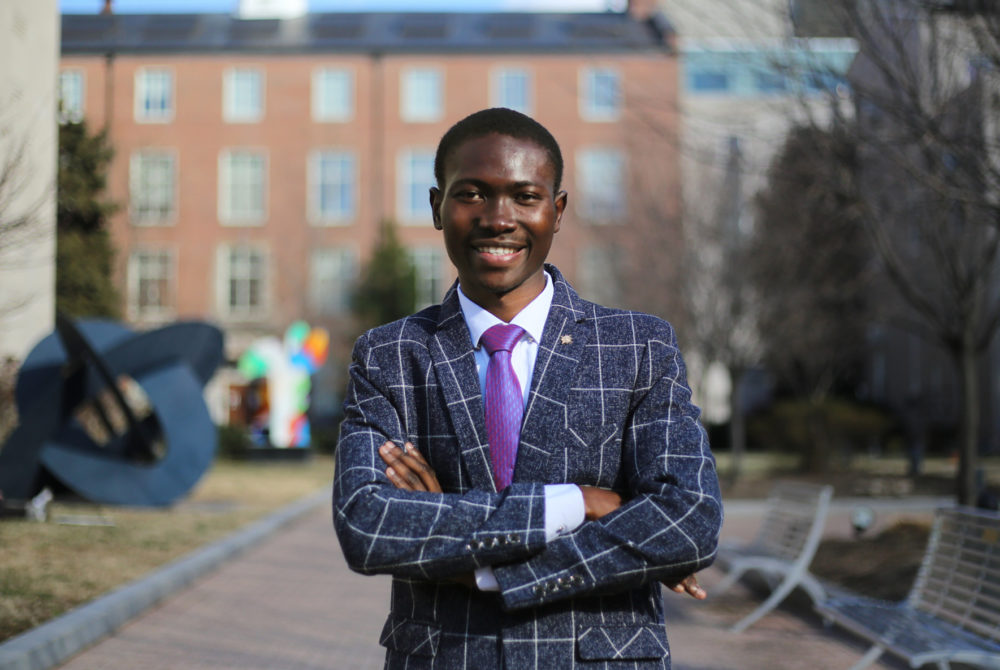 Christian Zidouemba has become the second and final candidate to enter the South African presidential race.

A two-time student union presidential candidate is mounting his third campaign for the SA’s top job.

Christian Zidouemba – a senior studying international affairs and international trade – became the second candidate to join the SA presidential race on Thursday, unveiling a platform to promote campus accessibility, help voters advocate with of SA and help students struggling to afford rising tuition fees. Zidouemba ran for president of the SA in his sophomore and junior years, losing both bids to former and current SA presidents Howie Brookins and Brandon Hill, respectively.

Zidouemba finished fourth in a field of six candidates in South Africa’s 2020 presidential election in his second year before coming in third in next year’s race. Students vote by priority vote over the two years and will do the same later this month.

Zidouemba said he could hold SA members accountable because of his outside perspective, which reinforced his platform which focuses on similar initiatives to previous years. He said he can recognize what students need and how the AS should accommodate them because of his experience as a repeat candidate.

“I am an outsider,” Zidouemba said in an interview. “I’m never embarrassed every year that I run. I like being an outsider and seeing things from a different perspective.

His entry into the race comes after SA Senator Dasia Bandy, the current chair of the SA’s Diversity and Inclusion Assembly, announced her presidential campaign late last month. If elected, Bandy would become the first black woman to serve as SA President at GW.

Zidouemba said he plans to provide additional mental health resources and increase accessibility on campus for students with disabilities after a professor refused a student to bring his service dog to class. earlier this semester.

“You saw the incident that just happened in the last three months, and the Students’ Association did nothing,” Zidouemba said. “They didn’t even condemn him. And that’s why I talk about being on the side of the student, not on the side of the administration.

The Student Union called on the University last month to fire School of Business professor Marie Matta who refused junior Liza Malinsky to bring her undocumented service dog to class after Services officials disability support told her she didn’t need it. The SA also demanded that officials fire Alicia Bitler, a GWTeach professor who said the N-word in a classroom as part of an anti-racism course.

Zidouemba said he will advocate for more diverse dining options under the University’s new Unlimited Dining System which will open three new all-you-can-eat dining halls in Foggy Bottom next fall to provide global cuisine to students. of different ethnicities. More than 1,000 people have signed a petition asking officials to keep GW’s current meal plan open to all students after this academic year, citing concerns about higher costs and fewer options under the new dining system.

“I already see so many people complaining about on-campus dining options,” Zidouemba said. “So as president, I’m going to advocate and work with the administration to make sure those resources are there and that we’re not just focused on American food, but we have food that represents our bodies. student because we have people from everywhere.”

Zidouemba said if elected he would work to increase donations to provide more scholarships in hopes of making GW more affordable for students from low-income backgrounds, including first-generation students. . Officials announced last week that the University’s tuition will exceed $80,000 for most undergraduates next year.

“If you increase tuition fees without increasing scholarships, it’s actually a burden on the first generations who want to come to GW but won’t be able to,” Zidouemba said.

Zidouemba said he is committed to improving relations between the student body and the SA. He said members of the GW community need to understand that the SA is meant to serve them rather than the administration.

“I don’t care what you think if I run two or three times,” Zidouemba said. “It’s about having an impact and making sure that students who don’t reach AS know that there are resources and that the student body is there to serve them, not just to fight against each other for a resolution that is not beneficial to the entire student population.

Zidouemba said his work with offices and organizations like the Alumni Association, Office of Undergraduate Admissions, and Association of African Students. He said he aimed to make students from all walks of life feel welcome on campus under his chairmanship.

“No matter your ethnicity, ability or political beliefs, I firmly believe this campus is the place for you,” Zidouemba said.

This article originally appeared in the March 10, 2022 issue of The Hatchet.

A U.S. bankruptcy judge has approved Purdue Pharma and Sacklers’ $6 billion settlement agreement with the states, according to Connecticut AG