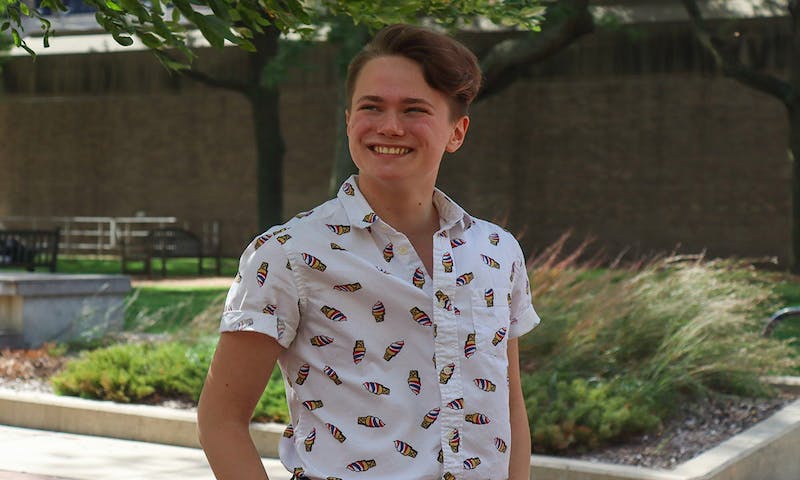 On Tuesday, the Student Council of Associate Students of Madison – the student government of the University of Wisconsin-Madison – met in person for the first time since the start of the pandemic.

The past year has been a tumultuous one for the body – much of it has been spent deadlocked with administrators over their handling of the pandemic, equity and inclusion of students of color, and the role of university police on campus. For the new ASM President Adrian Lampron, the new session is a new chance for the voice of the students to be heard and taken into account on these issues.

Originally from Minnesota and graduated in history and political science with a certificate in LGBTQ + studies, Lampron is an ASM veteran taking on new responsibilities as a leader. The Daily Cardinal spoke with Lampron for a conversation about the state of shared governance on campus, their plans for the year, and the music that guided them.

This conversation has been edited for clarity and brevity.

I’ll be honest, coming to UW and most of my time here, I didn’t know much about ASM – how it works, how it impacted me as a student. How would you describe the importance of ASM to people like this?

ASM has two main functions, and one of them is leadership. We pretty much allocate all of the separate fees that students pay to things like bus pass, student organization funding, UHS funding, gyms [and] Leisure and well-being. The other side is organization and grassroots activism. We work on issues of equity and inclusion, sustainability [and] university policy at the level of the state legislature. We go to meetings with the dean of students or meetings with the president of the UW system, trying to advocate for the needs of the students. We try to empower students to use their voice to influence decision making processes.

How would you rate the engagement of the UW campus in these policies?

Good question. I think with ASM directly, the average student is not very involved. We get around 8%, 6% voter turnout depending on the year, which isn’t great. But I think the students get involved in the problems ASM works in different ways. A lot of the work we do cuts across different student organizations or university departments. The Sustainability Office does a lot of things like our sustainability committee, which is the same things that CLEAN UW does, for example. Many people are engaged in one way or another with student advocacy issues, or are aware of the issues we are working on. But not much at the ASM level.

I think it’s fair to say that the past year has been controversial, in terms of the relationship between ASM and the UW administration. What kind of conversations have you had with the administrator this year? What does this working relationship look like?

We talked a lot with the admins we struggled to work with last year. I think there will still be some of the tensions from last year, just because a lot of the administrators’ tactics were revealed to us, because of the gravity of it, frankly. So it’s a little hard to start feeling like everyone is totally on your side again, because it’s not that simple. I think we have the opportunity to work more with administrators this year, but we’ll see.

They made a lot of decisions behind closed doors and without input from shared governance bodies. So if they continue to do so on issues other than COVID this year, that would be really disappointing. Hope that with the changing circumstances we can have a better relationship again.

You said after being elected last year that one of the things you really wanted to focus on was establishing a mental health intervention program on campus. Where is it now?

Enjoy what you read? Get Daily Cardinal content delivered to your inbox

So we don’t have anything like that on campus yet. Around this time last year, UHS proposed to develop a co-respondent model with the University of Wisconsin Police Department. There are people in UHS who think they have the capacity to start co-responding, with mental health providers accompanying the police to respond to mental health incidents. During the summer I watched to see what was happening at city â€‹â€‹level, and it didn’t look like it was going to be extended to campus.

It seems the best thing we can do at the moment is to support the co-response model. [This fall,] there will likely be two UHS mental health professionals who will respond with police to mental health emergencies on campus. Ultimately, we will be able to evolve towards a model closer to that on which the city is working with the CARES program, which is only send a paramedic and a first responder in mental health in the event of a crisis incident. We don’t have this on campus right now, but the city is moving towards it. And I hope we will go in this direction.

What are your other priorities for this upcoming session?

Well, something we’ve been talking about a lot over the summer is protecting and expanding shared governance. Basically, we want to make sure that the students are in the room when the decisions are made and that we actually have a vote instead of just being an advisory board, which often happens on campus. So trying to have a say in things like the meal plan or the types of housing options available to us, or even the costs of separate fees. We really want to have our say.

Let’s change the speeds a bit. What is your favorite class that you took at UW?

I think my favorite course is still the one I took called Visual History. It was an investigative course that focused a lot on European history and art. I had never taken an art history class before and didn’t think it would be very interesting. But the class basically taught me to look at things in history, like artifacts or art, and see beyond what you would necessarily see. I felt like I was looking at an old painting and thinking to myself, “oh, this is beautiful” or “this is really weird, why is this person wearing such a strange outfit? Then move on, and don’t take it very deeply. But this class forced the students to look at each piece of the artifact or painting and literally think about what it is? What does this mean for me, but also what does it mean for the person who made it or for the intended audience?

How did you fill your time outside of ASM and class? How to let off steam?

Well this summer I started learning more about foraging and identifying plants. So I tried to do it while the weather was still nice. I go to the Arboretum or Lakeshore Nature Trail and Preserve and try to figure out what the plants are around me and if I can snack on them. I haven’t had that much time for this lately, because ASM is so much, but I used to do it. I also play music; I write songs.

Yeah, your music! Did I see you opened a event for Ilhan Omar recently?

Yeah I did! It’s a bit long ago now. It was probably like, I think, right after the 2020 election.

Oh, I just saw it on your Twitter relatively high up.

I didn’t know you were a musician until I started preparing for this interview. But I noticed that wherever I could find a biography of you as an artist, you explicitly mention that your music is about the life of a trans person. Are there other artists that you admire or respect for their writing about these experiences?

It’s a good question. I have always loved Jake Edwards, who is this British singer-songwriter. He wrote the song Second Puberty which is about transitioning and trying to grow up as a trans person. This song still hits me. He hasn’t released a lot of new music recently, which is sad. Ryan Cassata is also an awesome trans musician who does a lot of work outside of music for trans people. And then what else? I mean, I always have to salute Sam Smith, who is the best – well, not the best, but the most famous – non-binary musician. So you have to love them.

I also find community with trans musicians that I know. My friend Bella is a musician and writes and creates this awesome, hyper pop stuff on Soundcloud. Not many people know or listen to this niche stuff, but it’s super cool to be fair with people who are really creative. I have a lot of people like that in the trans community here.

What will be on your wrapped Spotify this year?

Probably a lot of The Replacements, which is this old band from Minneapolis that I really like. I have also listened to the Mountain Goats a lot. Their album that I listen to all the time is All Hail West Texas. And probably a lot of Chance the Rapper too. These are my big ones right now.

Man, All Hail West Texas is an all-time great album. I feel like any negative feeling you can get can be cathartic.

When you look back on your college career, is there anything you would have done differently?

Well, there are always student organizations that I see at the organization’s fair or online where I think to myself, dammit, I should have gotten involved in this. I think there is so much cool stuff going on at this university that it’s hard to do it all. Maybe one thing I could have done better would be to work on inclusive housing here earlier. I just wish I had had more time to organize myself around radical queer activism on campus. There are a lot of gay student organizations here, and they do a lot of good community development and education. But I feel like a lot of queer college activists do so in a lot of places. There is no one unified place where students really push for toilet access, or the use of pronouns, or education around inclusive classroom education for teachers and the like. What I think [is] probably because it’s really hard being a trans or queer student here. If you are already having difficulty, it is difficult to organize yourself further. And we are not that many. I would like to have the time to create a queer student advocacy organization. But I don’t have time, so I do this job in a different way.

Something else you want to say? What have you been thinking about lately?

Well, I know that the students who are going to read this article will probably be informed enough already. But I think it’s really important that everyone knows that they can contact ASM. And while we can’t help you directly with whatever the issue, the folks at ASM know, for example, a lot about this university. Everyone here is engaging in niche conversations about what they’re working on. So if you have a problem with a specific engineering department, or a specific sustainability issue in your dorm, someone at ASM probably knows how to handle that. People can reach out and we’re here to help.