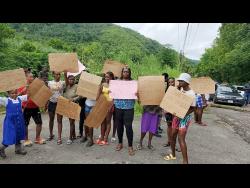 Frankfield Division Guardian Councilor KAREN CARTY is appealing to Clarendon North Western MP Phillip Henriques to do something about the two bridges which were washed away by the flooding rains of 2017.

The appeal comes on the heels of a woman and child who were swept away but were miraculously rescued last Thursday as they crossed the Rio Minho River in Southwood during heavy rain.

“We call on the current MP to do something before something does us. Leave a mark on North West Clarendon, you’ve been here two years. If it is even a major project, make it happen,” she urged.

Carty, who said she has lived in the community for about 42 years, complained that it is very frustrating to be on the road and having to rush home every time it threatens to rain to cross the river.

“Time and time again, when the river goes down, we have to sit for long hours before the river is pulled. It’s very frustrating when you have to carry your clothes by hand and put your clothes on a river bank and everything deh something,” she complained.

However, Henriques said that since taking office at the end of 2020 he “represents like crazy”.

Pointing out that the bridge was washed away while Richard Azan was an MP, he said he immediately started advocating for a new bridge for the community after winning the election.

“I had countless meetings with the Minister [Everald] Warmington and the National Works Agency on the condition of the bridge,” he said.

Henriques also revealed that he had several meetings over the past six months with residents, including Carty, regarding the bridge.

He insisted that almost every week he made representations on the matter.

“This year Mr Warmington walked out in Parliament in his budget speech [and said] that he would make it a priority,” he said. the gleaner.

He noted that the allocation of funds for the project is out of his hands.

“It’s no problem for me not to represent, I represent like crazy,” he said.

Frankfield Division councilor Clive Mundle, who understands the plight of the residents, is also calling for the issue to be addressed. Calling the situation shameful, he said it doesn’t matter which government is in power.

“It’s from 2017 uh, so it’s been five years now and it doesn’t matter which government is in power. You have to be able to build a bridge, even a pedestrian bridge in five years,” he added.