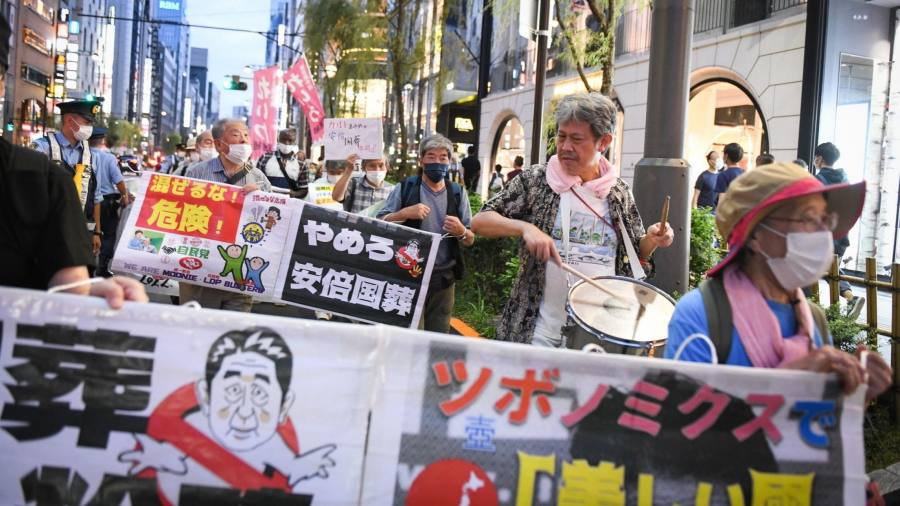 Less than a week after Shinzo Abe’s assassination in July, Japanese Prime Minister Fumio Kishida announced that a state funeral would be held for the country’s longest-serving elected leader. It was a decision, taken without any public debate, which showed Kishida in control of the political scene.

Kishida’s misfortunes have raised concerns that his time as leader could be limited and that Japan could return to a volatile period of revolving door prime ministers. Kishida’s predecessor, Yoshihide Suga, resigned after just one year. Before Abe’s record stint from 2012 to 2020, Japan had 17 prime minister changes since 1989.

It is a remarkable reversal of fortune for Kishida, who was elected prime minister in October last year. Defying initially low expectations, he led the ruling Liberal Democratic Party to two election victories, surprised his allies with a tough response to Russia’s invasion of Ukraine and signaled a big shift in the country’s energy policy. Japan, long paralyzed.

Public approval for Kishida’s administration peaked at nearly 70% in May. But recent polls by Japanese media suggest it has since collapsed to around 40%.

Takao Toshikawa, editor of the political newsletter Insideline, said there was no obvious political rival or faction within the LDP that could topple Kishida, but his government was “in a very difficult situation”, with no immediate prospect of recovery. in the Prime Minister’s popularity.

“He’s been extremely lucky since launching the administration, but it seems like the luck is turning,” Toshikawa said.

Abe and his family had a long association with the church, known officially as the Family Federation for World Peace and Unification and commonly known as the “Moonies”. The former prime minister’s murder suspect said he was seeking revenge for the financial ruin his mother allegedly suffered as a result of her involvement with the religious group.

During a survey by the LDP, nearly half of the party’s 379 lawmakers revealed a connection to the Moonies.

The uproar over the LDP’s relationship with the church has fueled anger over the decision to hold a state funeral for Abe, which polls show a majority of Japanese oppose. Thousands joined protests against the funeral, as a man in his 60s set himself on fire near the Prime Minister’s office on Wednesday in what was believed to be an act of protest against the funeral .

Critics have questioned the legal basis for the state funeral and complained about the lack of debate before the decision to hold an event that will be funded with taxpayers’ money. Japan has not held a state funeral since 1967 for former Prime Minister Shigeru Yoshida, one of the country’s most important post-war leaders.

“After the election was over, Kishida tried to portray himself as a decisive leader and it was an important decision he made to hold Abe’s state funeral,” said political analyst and academic Masatoshi Honda. “But it completely failed.”

A Western diplomat said Kishida miscalculated the public’s response to the LDP’s ties to the Moonies and the funeral, even though his instincts on the popular mood proved correct on other important issues such as the war in Ukraine.

Kishida argued that the funeral will provide a diplomatic opportunity to engage with leaders from countries and regions like India, Canada, Australia and the EU.

While US President Joe Biden will not attend Abe’s funeral, Kamala Harris, the Vice President, will attend and is expected to hold a meeting with Japan’s biggest chipmakers the following day to discuss economic security issues. , according to two people with knowledge of the plan.

Analysts said the funeral would allow Kishida to at least briefly meet a variety of world dignitaries, but the prime minister did not specify a specific foreign policy agenda.

Kishida has also failed to follow through on plans announced last month to speed up the restart of nuclear reactors shut down after the 2011 Fukushima crisis. He is also facing growing pressure to address public concerns about the rising cost of life.

Honda, the academic, said part of the explanation for declining public support for Kishida could be the lack of passion with which the prime minister delivers speeches or press conferences. “He hasn’t really answered the big question of what he really wants to do as prime minister,” Honda said.

Student loans: can you declare bankruptcy for loans?