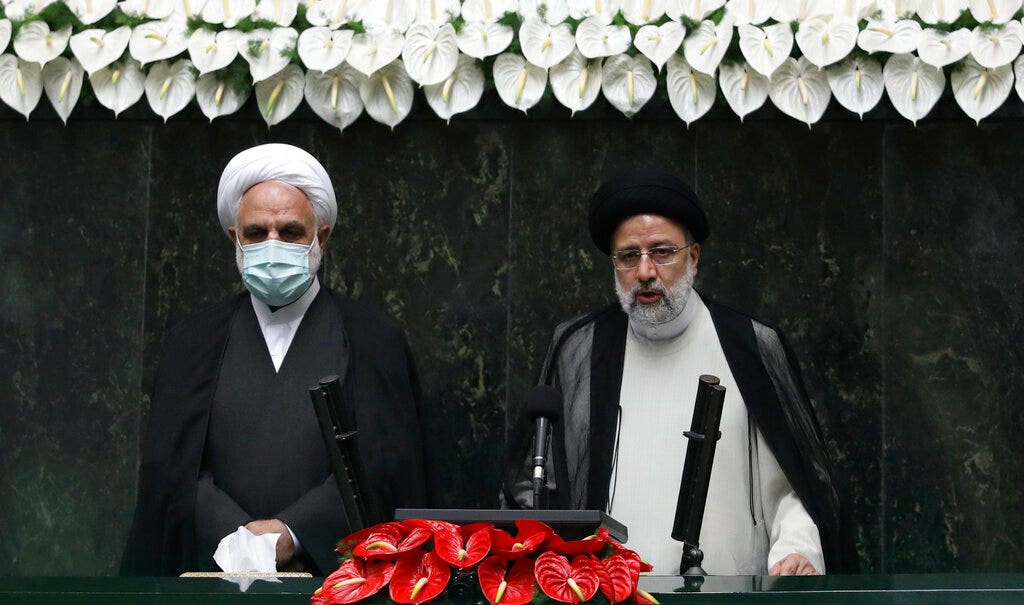 The new hardline Iranian president Ebrahim Raisi, who has been linked to mass executions and crackdown on political opponents, was sworn in on Thursday as dissidents urged international leaders not to play with the regime.

Iranian officials have declared Raisi the winner in a June election marked by low turnout and pursued by allegations of election rigging. He previously served as Tehran’s Attorney General between 1989 and 1994 as well as the first deputy head of the judiciary between 2004 and 2014.

He played a key role in a “death commission” that ordered the execution of thousands of political prisoners in 1988.

The US government noted Raisi’s involvement in what he described as a “brutal” crackdown on Iranian Green Movement protesters following the 2009 elections.

The US government sanctioned numerous Iranian officials, including Raisi, for human rights violations in 2019. The Treasury Department cited US reports that under Raisi the judiciary sanctioned the execution of child offenders and arrested lawyers for defending political prisoners and human rights defenders.

Raisi has taken a tough stance on the negotiations, demanding that sanctions be lifted before Tehran compromises. He repeated it during his inauguration speech.

“The sanctions must be lifted,” Raisi said. “We will support any diplomatic plan that supports this goal.”

He also signaled that Iran was seeking to expand its power to counterbalance the enemies in the region.

“Wherever there is oppression and crime in the world, in the heart of Europe, in the United States, in Africa, in Yemen, in Syria, in Palestine… we will be on the side of the people”, said he said, referring to militias supported by Iran. in Yemen and Lebanon.

However, the regime is in a weakened position due to its poor economic situation, exacerbated by US sanctions, and its disastrous handling of the COVID-19 pandemic. It has also been pursued by protests, including recent protests against water shortages.

The dissidents urged the United States and Europe not to negotiate or conduct diplomacy with the regime.

“The policy of appeasing ruling religious fascism in Iran is no longer constructive or effective,” National Council of Resistance of Iran (NCRI) president-elect Maryam Rajavi said in a statement this week. “Neither this murderous regime nor the maintenance of relations with it has any more legitimacy.

The group, which calls for a democratic and secular Iran, also published a book pleading for the international community to hold Raisi to account for his alleged crimes.

“If the world community is serious about ending the vicious human rights violations in Iran, it must take effective action to end impunity for the 1988 massacre and stop the unprecedented rate of executions,” he said. “If the world had not remained silent 33 years ago, respect for human rights would be very different in Iran today.

“Our message to President Raisi is the same as our message to his predecessors and it is very simple: the United States will defend and advance our national security interests and those of our partners,” he said. “We hope Iran will seize the opportunity now to offer diplomatic solutions.”

The Associated Press contributed to this report.