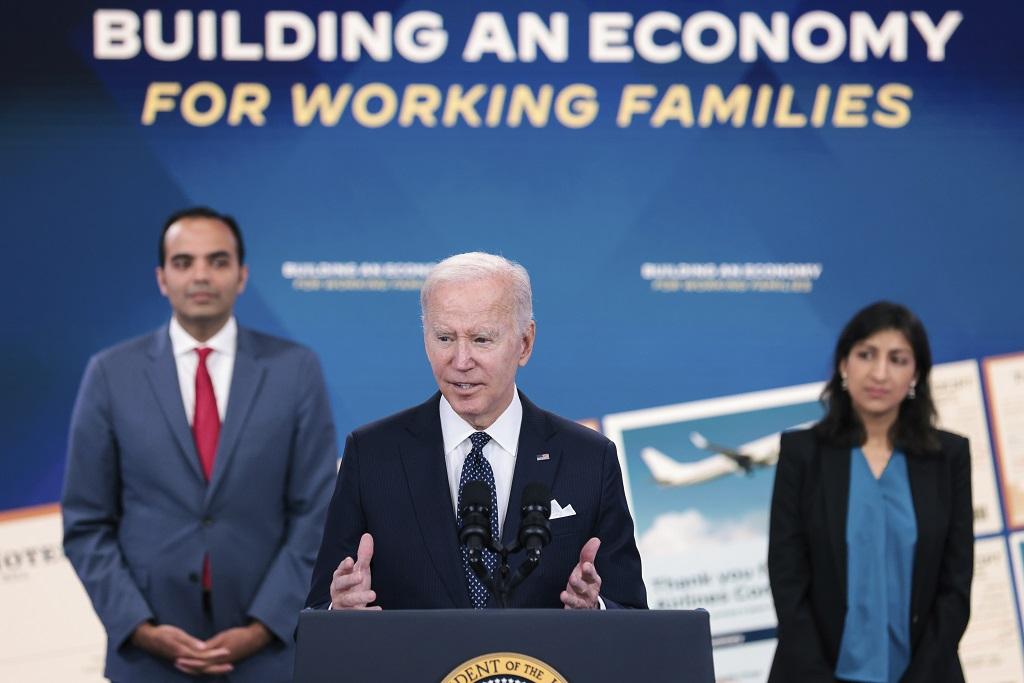 The revolving door project, a Perspective partner, scrutinizes the executive and the presidential power. Follow them on thevolvingdoorproject.org.

Congress has spent the past four weeks in a long fall recess. The move has been a Congressional norm for some time, a relic from the days when it was indeed strategic for candidates to campaign in person and attract local media in the weeks leading up to the election. Democrats have followed that old convention this year, no doubt amid pleas from their most threatened incumbents.

But we don’t live in that time anymore. Tip O’Neill’s famous adage that “all politics is local” can no longer be taken at face value. Not when local media is a shell of itself, thanks to private equity and the explosion of digital news and social media. Especially not when national issues such as the economy, abortion and the protection of democracy and the right to vote have risen to the top of voters’ priority lists.

If Democrats in Congress had instead chosen to extend the legislative session, or even just meet briefly before Election Day, they could have forced big, headline-grabbing votes on salient issues. Imagine that the news cycle before this election focuses on Democrats voting for marriage equality and abortion rights, cracking down on price gouging, implementing anti-profiteering taxes and raising the minimum wage as methods of inflation protection, as well as protect and extend social security and health insurance. These votes would have resulted in exciting and positive policy developments for Democrats to campaign on, or would have forced Republicans to vote against hugely popular bills, lending Democrats galvanizing platforms on which to launch advocacy campaigns. opposition.

Unfortunately, Dems didn’t do that. However, Democrats still have a chance to do something compelling with the rest of this legislative session. With little to lose and everything to gain, we think they should.

For starters, Democrats shouldn’t accept yet another continuing resolution that continues the heavy legacy of fiscal priorities from the Trump administration. They certainly shouldn’t do it just to avoid a public fight with Republicans. People like it when politicians do something. People love it even more when that “something” fights back against corporate malfeasance, like querying Data for Progress shows.

Instead of riding on an omnibus package that funds little apart from the most wasteful, punitive, toxic, and ineffective parts of the federal government, Democrats should commit their party to a budget for fiscal year 23 that truly reflects their stated values. These budgetary allocations could include an increase in the capacity to fight against predatory pricing at the Federal Trade Commission (FTC) and the Department of Justice Antitrust Division (ATR), to really tackle the root causes of inflation. Democrats could demonstrate their commitment to working people through fully accountable agencies like the National Labor Relations Commission (NLRB) and the Occupational Safety and Health Administration (OSHA) with the resources they need to succeed, but have been denied for so long. They could proactively protect the environment and communities on the front lines of climate change by channeling funds to support staffing at the Environmental Protection Agency (EPA) and to feed the DOJ Environment and Natural Resources Division (ENRD) to crack down on environmental crimes across the country.

It’s very easy to send a message to all of these proposals in a way that will excite voters: just tell them that Democrats are cracking down on price gouging, strengthening unions, making workplaces safer, and giving regulators real teeth to fight pollution from the big oil companies. You don’t need to get into all the jargon and legalisms. You just need to communicate to voters that Democrats want to make America a better place to live, and Republicans don’t.

Democrats could even use a united party front to expand Social Security benefits, supporting struggling seniors who face the challenges of inflation and the ongoing pandemic. The federal budget matters a lot and deserves a fight. Conveniently, the budget also offers Democrats one last ditch attempt to do something while their (albeit slim) majorities are secured.

Republicans created a validation crisis by their systemic rejection of officials appointed to staff the executive. Democrats should reform the Senate processes that allowed this crisis to develop in the first place. In the meantime, however, time is needed in the Senate to finally get some of these integral candidates through.

Basically, the Senate must strive to confirm not only the judges, but also the candidates for WE Lawyerssenior executives and managers of the independent agencies, which have been left in limbo for months, if not years. While these candidates and positions are not publicly recognized, the things their agencies do have tangible benefits, not to mention compelling strategic benefits, that resonate with the public.

If the Democrats finish staffing the federal government, they will finally be able to address many policy priorities, even in the event of a Republican congressional sweep. Delivery the votes for (finally) restore net neutrality, protect marginalized workers against workplace discrimination, or invest in renewable energy at the federally owned Tennessee Valley Authority is a smart political strategy that Democrats can possibly campaign on.

Of course, the nomination of candidates for the judiciary is also essential. GOP judges keep doing unpopular things, like tackle the fundamentals of American democracy, to remove people’s rights, and insulating partisan actors to investigate their potential crimes. Even more recently, conservative judges have also fundamentally attacked the very existence the Consumer Financial Protection Bureau (CFPB). Sitting competent judges on the federal bench to protect the public from these rulings is also politically savvy and, more importantly, the right thing to do.

The role of the president

The Democrats should have been in Washington for the past few weeks. But regardless, President Biden should have led consistent, high-profile attacks against forces almost universally hated in the United States. He could have spent October attacking rising corporate prices, taking executive action against Large Pharmacy and great oiland, as we have repeated many times this year, generally crack down on businesses while being extremely loud about it.

Companies are raking in record profits from unethical and illegal practices and facing little or no penalties. Voters know—83% of voters from all parties believe ordinary Americans pay the price when the crimes of wealthy people and corporations go unpunished – and want to see the government hold wealthy criminals accountable.

But every time Biden stages an event like this without being specific in his attacks, thus inciting companies to fight back and providing voters with a healthy dose of conflict, he misses an opportunity to engage voters. Did the president stab, say, Ticketmaster for its junk fees? Wouldn’t it have gone viral if he had a good one-liner about them? This event, in all its intent, was not even part of the major news cycle that day.

Unpopular villains may have the good sense to remain anonymous, but unpopular companies are also often run by people with huge egos who can get drawn into tense conflicts. (Hello, Elon Musk!) This forces Biden to violate norms and actively incite these specific corporate bad actors.

Democrats could have spent the fall fighting over the issues that matter to their constituents. From anti-abortion rhetoric and unbridled corporate profiteering to election denial and racist hissing, Republicans and their corporate allies are making easy villains every day. Voters want to see Democrats name this villainy and stop it in its tracks.

Such action breeds conflict, yes, which is extremely beneficial. This foments excitement in the party base that could spark the motivation needed to keep blue incumbents in their seats and oust proto-fascists elsewhere. The GOP understood the political opportunity to publicly staged conflicts. They’ve used it to inflame racist rhetoric while trying to win political hollow points over an imaginary crime wave and xenophobic backlash against immigration.

Democrats have left this hateful rhetoric unchallenged for far too long. They would have to confront this message head on by finally forging a coherent, clear and divisive message, which could finally motivate the anti-hate majority at the polls.