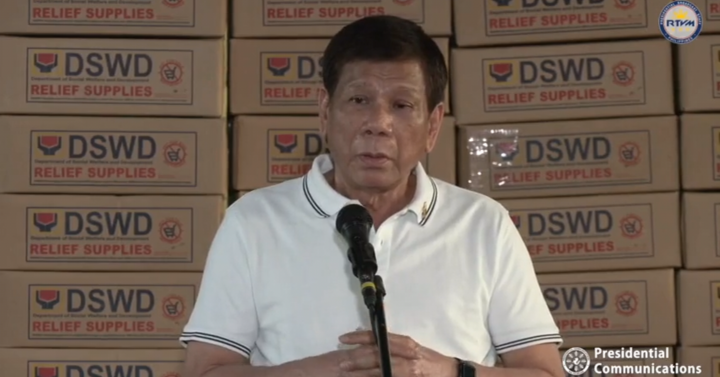 Duterte begs next admin to be much better in all aspects

MANILA – President Rodrigo Duterte on Saturday expressed optimism that the next administration will be “much better” at solving the problems the country continues to face.

He also hopes that his campaign against illegal drugs and the communist insurgency will be continued by his successor.

Nevertheless, he assured that the fight against drug addicts and communist rebels would be relentless until he left office on June 30.

“I hope and pray that the next administration will be better than mine in every way. Dinadasal ko iyan for his kababayan, for his inyo (I pray for my compatriots),” Duterte said while visiting victims of Tropical Storm Agaton staying at the Pontevedra Elementary School Evacuation Center in Pontevedra, Capiz.

“Hindi kayo maghinto, mag-away talaga tayo (We will fight if you don’t stop). But we were friends. We were friends. Have been na kasi tapos na (because everything is in the past). But I hope whoever comes after me will try to reconnect and I pray that this (peace talks) will succeed,” Duterte said.

Duterte also renewed his call for communist insurgents to surrender and reintegrate into mainstream society, reassuring them that they would get help from the government.

“I hope we will find peace with the communists. Ayokong makipag-away sa inyo (I don’t want to fight you),” he said. “You know, you can fight for 53 years. You want another 53 years? And you think you can win a barangay (village) or a city? Not in a million years. Mabuti pa bumaba na lang kayo (It is better that you surrender).

Peace negotiations between the national government and the political wing of the Communist Party of the Philippines (CPP), the National Democratic Front (NDF), have been on and off since 1986.

Duterte held a series of peace talks with the NDF but decided to end the negotiations following relentless attacks by the CPP’s armed wing, the New People’s Army (NPA), on government troops and civilians.

He officially ended the peace dialogue with the NDF through Proclamation 360 inked on November 23, 2017, followed by the signing on December 5, 2017 of Proclamation 273 which declared the CPP-NPA a terrorist group.

The CPP-NPA is listed as a terrorist group by the United States, European Union, United Kingdom, Australia, Canada, New Zealand and the Philippines.

The Counter-Terrorism Council also officially designated the NDF as a terrorist organization on June 23, 2021, citing it as “an integral and inseparable part” of the CPP-NPA which was established in April 1973.

Stop or get killed

Likewise, Duterte repeated his warning to drug figures that they would be killed if they continued their illegal drug activities.

He reiterated that he was pained to see a family become “dysfunctional” simply because one of its members got involved in narcotics.

A total of PHP 76.01 billion worth of illegal drugs were seized nationwide from July 2016 to February 2022, according to Real Numbers data from the Philippine Drug Enforcement Agency.