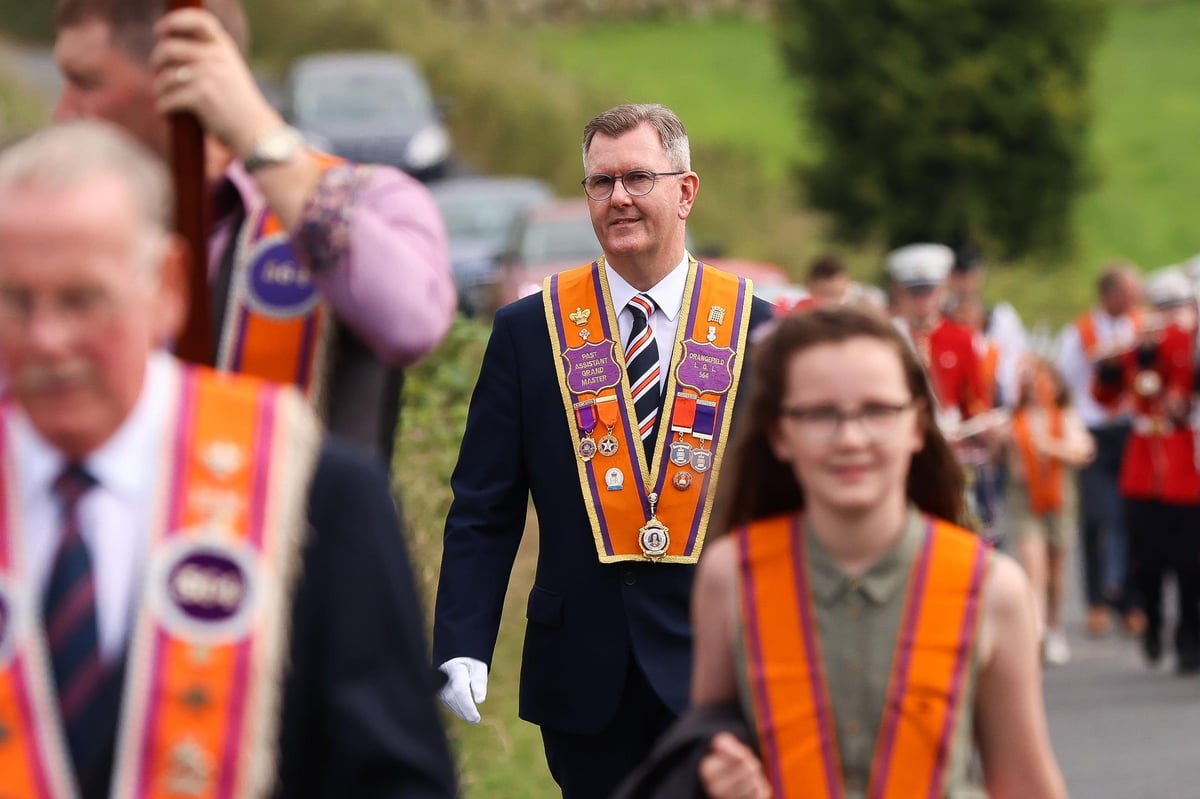 Donaldson: Political unionism must walk together

In a pre-Twelfth message to the DUP base, the party leader said: ‘Just as we will all march together on Tuesday, I look forward to the day when there will be a similar collective approach at the ballot box.

Sir Jeffrey continued: “On July 12, 1979, when I joined Orangefield, Ballinran LOL 564 in the Morne district, aged 16, our political challenges were different, but our determination to protect and secure the he future of Northern Ireland was no different. I had the privilege of serving as Deputy Grand Master of the Orange Order in the 1990s. An organization that brings together pro-union voices.

“The last twelve months have encouraged me as I have witnessed a growing appetite for closer cooperation between all shades of trade unionism. Everywhere I traveled during the NI Assembly election campaign, I urged people to move on to other unionists, but also warned that division would cost seats.

Register to our daily newsletter

Sir Jeffrey Donaldson parading on the 12th last year. The DUP leader, who joined the Orange Order in 1979 aged 16, said the institution was an example of “an organization that brings together pro-union voices”.

Reflecting on unionism’s electoral losses, the DUP leader said: “I hope May 2022 was the month when all shades of unionism collectively learned that fielding too many candidates costs seats. Proportional elections allow voters to maximize their vote, but some people choose not to transfer, and in many cases too many candidates divide too thinly.

“I look at North Antrim, East Antrim and Strangford. There were enough trade unionist votes to elect four unionist MPs in each constituency, but only three trade unionists were elected. Instead, non-union parties have taken advantage of our division.

Describing these divisions as ‘manufactured’, Sir Jeffrey said: ‘Since the election I have engaged with trade unionists from all parties and across Northern Ireland to strategically examine how the pro-Union vote is maximized in future elections. Many of those who have engaged with me are not currently members of any party, but they see that the future of Northern Ireland is best served in the UK and they want to play their part. As we deal with the machinations in Westminster, we must remain focused on the long-term goal of building cohesion in the pro-Union vote in Northern Ireland.

On the end of Boris Johnson’s term as Prime Minister this week and the chaos that has rocked the Conservative Party, Sir Jeffrey said: ‘Many people ask me what impact Boris’s departure will have on the bill on the NI protocol. No one can predict the future, but we can look at the facts.

“First fact. The bill is still scheduled for its next stage in the House of Commons on Scarva Day – Wednesday July 13. I will be there to see the Bill move forward unamended so that we can take another step towards restoring Northern Ireland’s place in the UK. I hope that with the Conservative leadership campaign in full swing, some MPs will refrain from politics with Northern Ireland.

“The second fact is that a stable decentralized government can only be built on a solid foundation. With no unionist support in the Assembly, the NI protocol undermined the foundations rather than supporting them. A fully functional devolved government in Stormont and Protocol cannot co-exist. Therefore, whoever wins the Conservative Party leadership election, the protocol will still have to be dealt with. »

One of the Tory leadership contenders is ex-Chancellor Risi Sunak, who kicked off his campaign on Friday with the release of a video in which he highlighted ‘fiscal credibility’ as well as the history from his family on how his grandmother brought his mother to Britain from the Indian subcontinent and ended up raising a family in Southampton, where Mr Sunak was born.

Meanwhile, the new Northern Ireland Secretary made his first visit to the Province yesterday and met young people in Belfast.

At an event at the city’s Prince’s Trust center, to which the media were not invited, Shailesh Vara said the UK government was looking to “build a fairer and more equal society in Northern Ireland”.

Mr Vara said the government remained “committed to increasing respect, understanding and reconciliation between communities in Northern Ireland and helping to build a better environment for future generations”.

He also described his visit to the Prince Trust center as ‘fantastic’ and praised the charity for supporting young people in building their confidence and skills.