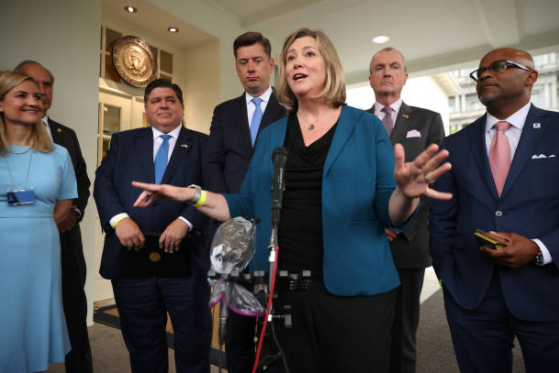 While Governor Mike DeWine delivered his State of the State address, Democratic hopeful Nan Whaley was in Chillicothe to outline her vision for Appalachia in Ohio. She spoke alongside Chillicothe Mayor Luke Feeney and Athens Mayor Steve Patterson on Thursday.

Whaley’s plan would direct investments to the 32-county region of southern and eastern Ohio to address what she calls a 50-year funding shortfall. His plan would focus on improving broadband, tackling the opioid crisis and investing in local infrastructure and services.

The needs of the region have been well understood on both sides of the aisle for a long time. DeWine, for example, called for “reviving the pioneering spirit” of the region during his speech. He proposed a series of investments in a number of the same areas identified by Whaley.

Perhaps the most notable initiative in Whaley’s plan is a commitment to universal broadband in the region by 2028. Expanding broadband access has been a ready talking point for both parties even before the COVID-19 pandemic underscored the problem. Whaley called him a “sweet spot” for recent federal funding.

” The result ? We need to stop talking about broadband expansion and actually do it,” Whaley explained in his plan.

These federal funds also come into play for investments in local infrastructure. Whaley promised to use funds from the bipartisan infrastructure package to support “main street businesses” by investing in trade corridors around the state. DeWine made similar pledges during the state of the state address.

But Whaley takes local support a step further by hinting at new funding streams for local governments. The state’s local government fund was reduced under the Kasich administration, and this reduction in revenue caused local governments to become more dependent on income tax. This has become increasingly precarious as remote work threatens to shift the tax base in Ohio.

“As more and more work can be done remotely or in a hybrid environment, communities across our state will feel the impacts,” Whaley’s plan said. “We must deal with the impact of these changes on the tax status of our communities and their ability to continue to provide the services Ohioans need.”

In addressing opioid addiction, Whaley acknowledged the challenge of waiting for funding from a recent court settlement, but at the policy level she said it was clear what was working.

“The majority of individuals can successfully overcome addiction with treatment, stable housing, employment, and strong family and community support systems,” Whaley said. “That’s what a governor can help with.”

She proposed ensuring the availability of 30-day recovery beds in every county in Appalachia and expanding harm reduction services such as naloxone provision and needle exchange. Whaley would also advocate making counseling and addiction services reimbursable under Medicaid.

Whaley also complains that the state is not taking advantage of funding available through the Veterans Administration.

“Ohio State’s two veterans’ homes — located in Georgetown (southwestern Ohio) and Sandusky (northern Ohio) — provide only 750 of the 2,184 beds allocated to our state by the federal VA,” Whaley’s plan describes. “Federal funds are available to pay for those extra beds, but Ohio is leaving that money on the table.”

She noted that more than 100 veterans are currently on the waiting list for beds. To use this funding, Whaley suggested using public funds to create 15 small-scale veterans’ homes with at least 1,000 new beds.