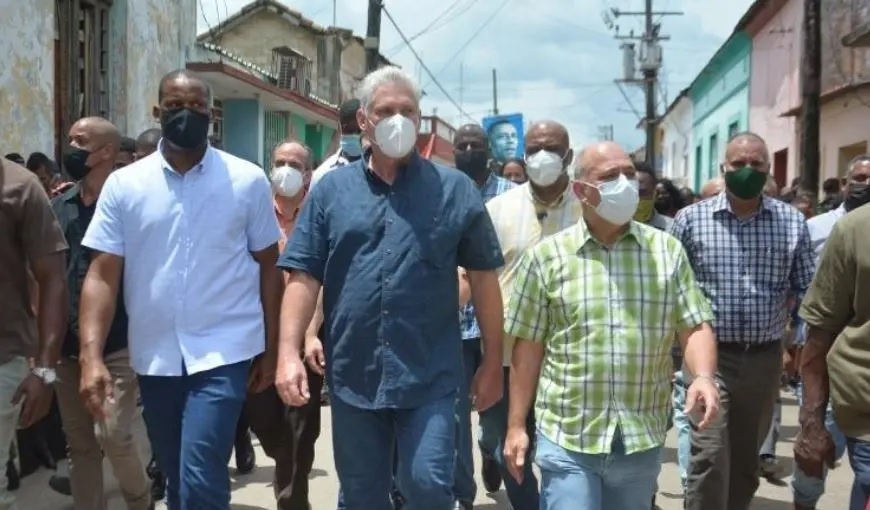 HAVANA TIMES – The Cuban government has refused, through its local authorities, the authorization of a peaceful demonstration scheduled for November 15e in several provinces. Official press announced the news accusing the initiative of being “of a destabilizing nature”. This is the first formal and widespread call across the country to organize an unofficial political protest in Cuba in the past 60 years.

Alexis Acosta, mayor of Old Havana, signed a letter addressed to Yunior Garcia, leader of the Archipielago group, in which he affirms that “the reasons given for the protest are not legitimate. The promoters and their public projections, as well as their links with certain subversive organizations or agencies funded by the US government, have a clear intention to bring about a change in the Cuban political system. This confirms that the announced demonstration, which is being organized simultaneously in different provinces of the country, is a provocation as part of a strategy “to change the regime” in Cuba, which has been orchestrated in other countries.

In Santa Clara, Cienfuegos and Las Tunas, applicants for authorization received identical copies of the same document, signed by their respective municipalities.

The Archipielago platform indicates that the decision is still to organize a civic and peaceful demonstration on November 15, despite the government’s refusal.

“The government’s response proves once again that there is no rule of law in Cuba, that they are not even willing to respect their own constitution and violate the human rights of Cubans,” reads. one in a brief statement on the platform’s Facebook page.

“Our personal decision will be to demonstrate in a civil and peaceful manner for our rights on November 15th. We will respond to authoritarianism with civility and more civility, ”they conclude.

Four reasons are given to protest: the release of political prisoners, in particular those detained on July 11; the end of violence; respect for the rights of every Cuban; and solve problems through democratic and peaceful means.

On Monday, October 11, Archipielago announced that officials of the municipal assemblies of People’s Power had summoned the signatories of the authorization permit for the civic demonstration for the change, initially scheduled for November 20 and now postponed to November 15. Applications were filed in eight provinces: Havana (20/9), Holguín (21/9), Santa Clara (22/9), Nuevitas (Camagüey, 22/9), Cienfuegos (27/9), Guantanamo ( 28/9), Pinar del Río (1/10), Las Tunas (7/10) and Camagüey (12/10).

The initial date of the protest was November 20; but it was put forward when it was announced that a series of military exercises would be held that day by the Revolutionary Armed Forces.

In recent days, many signatories of these demands have been questioned and coerced by State Security. Others are under police surveillance at their homes. Doctor Manuel Guerra, residing in Holguin and a member of the Archipielago platform, was arbitrarily arrested and released a few days later. Yunior Garcia has been the target of a smear campaign by partisan profiles on social media and state-controlled media. Since the announcement of the government’s negative response to the protest, there have been reports of the arrest of Daniela Rojo, administrator of Archipielago, other activists cut off from the Internet, as well as cases of home surveillance.

Sally Gonzalez Velazquez (Santa Clara): “While we were given a letter with many signatories (there were 22 in Santa Clara), I received a response addressed to me. The first thing they did was to vacuum, ignore the other signatories and of course, the civil society who defended the protest, especially on social media. The authorities have decided to ignore the popular support for this completely peaceful citizens’ initiative. It is important for the world to know that the government of Cuba does not allow its citizens, civil society, to protest.

“The government uses laws that best suit its interests and ignores the constitutional rights of its citizens. Even the institution, which in this case is the National Assembly of People’s Power, responds to the government rather than the people as it should. This is totalitarianism 101. It should also be noted that many signatories are under police surveillance. Many activists have had their Internet access cut off, and others have been threatened. We ask while exercising our rights. We are not asking either: we are demanding. There are hundreds of political prisoners in Cuba and we are not going to leave them alone. It is also a demonstration of solidarity with those who stood up on July 11 and were arbitrarily arrested.

David Martinez (Cienfuegos): “When announcing their negative response, they said that any demonstration against the government, communism or the socialist system is organized by the CIA or funded by the US government, which is completely absurd. They must prove that I am receiving funds from abroad to support this request. It is enough to be against the current situation and the current system, to want a change in Cuba. ”

Leinier Cruz (Guantanamo): “We are not from another country. We are Cubans who want to express our disagreement with many of the country’s problems. Just as the government protects and ensures order during officially organized marches, it should also do so with any other demand. Those who disagree with the government should also have legitimate channels to voice their non-compliance. “

Leonardo Fernandez Otaño (Havana): “We have seen an authoritarian state unmask itself. Faced with a citizens’ initiative, the only thing it knows how to do is go back to chanted slogans, to old structures that mean nothing to us. It is time for citizens to act responsibly, betting on reconciliation and for peaceful transfer or power. Pacifism versus authoritarianism. The most interesting thing about all of this is that they saw Archipielago as a real player, with all their language, and they know that he is a player who knows how to organize himself. I believe this is the authoritarian state’s greatest fear. Right now we have to think with a cool head and be a lot smarter. We have transparency and the ability to be democratic on our side. The only thing we can do is be careful and have good judgment as citizens, listening to every proposition that emanates from the different social actors and the different members of the archipelago. This is what pushes us to articulate more. “

Full text of the response to the request for a peaceful demonstration:

After reading the document presented, concerning the decision of many signatories to demonstrate soon, we inform:

Article 56 of the Constitution, which is mentioned as the legal basis for the protest, stipulates the requirement of legality and “respect for public order and respect for the rules established by law when exercising your right to demonstrate ”.

In terms of legality, the protest is not considered legitimate because of the reasons given. The promoters and their public projections, as well as their links with certain subversive organizations or agencies funded by the US government, have a clear intention to bring about a change in the Cuban political system. This confirms that the announced demonstration, which is being organized simultaneously in different provinces of the country, is a provocation within the framework of the strategy of “regime change” in Cuba, which has been orchestrated in other countries.

In addition, upon its announcement, the protest received public support from US lawmakers, policymakers and the media who encourage actions against the Cuban people, with the aim of destabilizing the country and calling for military intervention.

Article 45 of our Constitution states that “Persons exercising these rights are limited only by the rights of others, collective security, general well-being, respect for public order, the Constitution and the laws. . Article 4 states that “the socialist regime which this Constitution supports is irrevocable”, so any action against it is illegal.

The Cuban Constitution was widely debated and approved by popular referendum, obtaining 86.85% of the vote, an overwhelming majority that chose the socialist system in a free and sovereign way, as well as its irrevocability and the right to fight, by all possible means, against anyone who attempts to overthrow the established political, social and economic order.