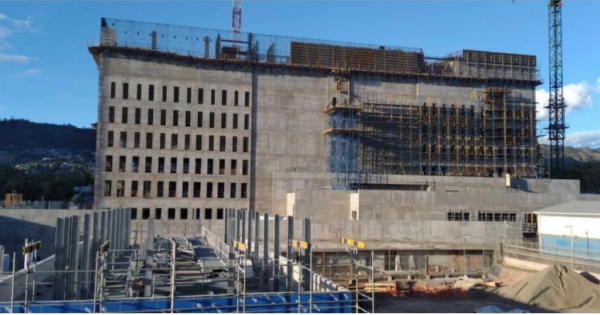 More than 900 construction workers in Honduras building a new US embassy went on strike Wednesday and Thursday to demand fair treatment.

The contractor, BL Harbert, was previously accused of underpaying and abusing workers who built the US embassies in Ghana and Namibia.

Workers in Honduras say they have been coerced into signing illegal labor contracts that do not protect them from workplace injuries, according to HCH. Workers are also asking for permanent contracts. Some were forced to sign hourly contracts, which is also illegal, according to Radio America.

Adrienne Pine, a medical anthropologist in Honduras, says workers pay for their own health insurance, are fined if they miss a day of work for any reason, and are given spoiled food for lunch. People injured on the job did not receive any sick leave or compensation.

BL Harbert is “revising its contracts” to comply with new labor laws, the U.S. Embassy in Honduras said in a statement

UK train drivers from the Associated Society of Locomotive Engineers and Firemen (ASLEF) could go on strike for the first time in 27 years as workers from the 10 companies it represents go to the polls. ASLEF director Mick Whelan told the Financial Times that walkouts were “likely” as three companies have already agreed to strike. Drivers are fighting for a pay rise in line with the UK inflation rate.

“We believe [strikes] will have a massive effect,” Whelan said. “There will be a summer of disruption.”

Members of the Transport Salaried Staffs’ Association, which represents 6,000 white-collar railway employees, are also threatening to walk off the job. A union spokesman told the Evening Standard that its London staff were on starting salaries “in the early £20,000s” and one member said it was “better to work at Lidl”, a chain of European supermarkets.

The actions of the two unions come after 40,000 members of the National Union of Railway, Maritime and Transport Workers (RMT) quit their jobs in June, shutting down the country’s entire rail network. The RMT is not ruling out further strikes if it fails to reach an agreement on wages and working conditions with Network Rail and the train operators.

Learn more about the Financial Times

Scandinavian Airlines (SAS) pilots went on strike this week to fight the airline’s decision to set up two subsidiaries – SAS Link and SAS Connect – to hire new pilots at lower wages and circumvent its previous suspension agreement. rehiring pilots laid off during the pandemic.

Half of all SAS scheduled flights have been grounded since Monday, when 900 SAS pilots from Norway, Denmark and Sweden left their jobs. About 30,000 passengers per day are affected.

Meanwhile, the airline has filed for bankruptcy protection in New York, which would put civil lawsuits on hold while the company reorganizes its finances, the Associated Press reported.

SAS pilots’ union leader Roger Klokset denounced the decision, saying SAS “extended negotiations and mediation from November last year until the day before the bid” and never had the intention to reach an agreement with the pilots.

Read more from the Associated Press via ABC News

Workers at Jordan’s Red Sea port of Aqaba are on strike to protest unsafe working conditions.

Thirteen people died and more than 300 workers were injured last Monday after a crane loading containers of chlorine onto a ship dropped one, causing it to explode, Reuters reported.

Labor leader Ahmad Amayra said he was “committed to halting until our demands to provide an adequate industrial safety environment” are met.

The incident could have turned catastrophic if dozens of workers finishing shifts were still on site during the leak, industry experts said. The winds also blew the poisonous gas from populated areas into the outlying desert. Industry experts say security measures at the country’s only commercial port have been poor.

Learn more about Reuters via US News & World Report

Factory workers in Myanmar “barely have money to buy food” as wage theft, rehiring of wage laborers as day laborers and the banning of trade unions are rampant under Myanmar’s military rule, said one of the country’s trade union leaders to Myanmar Now. in an interview.

Since the February 2021 coup, 1.6 million employees have lost their jobs nationwide. Some 16 workers’ groups have also been banned, said the general secretary of the Trade Union Coordinating Committee, Ye Naing Win.

In the meantime, the majority of trade union organizations that supported these workers have left the country.

He added that many factories have closed since the coup, some workers’ unions have closed and others are no longer functioning. Strikes are illegal under the current administration.

But it attests to the firm will of the workers. “If tens of thousands of workers starve to death, they will take to the streets to protest, with no one rallying them.”

Healthcare workers in Turkey have gone on a two-day strike after a doctor was killed in the central city of Konya. Workers are unhappy that they are not sufficiently protected against workplace violence.

On Wednesday, cardiologist Ekrem Karakaya and his secretary were murdered by a man distraught over the death of his mother, who was Karakaya’s patient. The man, Hacı Mahmut Akcay, died following the attack.

“Violence is a predictable and preventable social problem, and this problem can be overcome with comprehensive policies aimed at solving it,” the Turkish Medical Association said in a statement.

Violence against medical workers increased by 62% in 2021, when 364 medical workers were attacked and 316 lost their lives, according to a report by the Union of Health and Social Care Workers. Only 11% of the attackers were imprisoned.

The government banned media coverage of the murder shortly after the incident, Balkan Insight reports. Media that violate the ban can be fined.

Flight attendants hope airlines will continue to provide masks and other personal protective equipment even when mask mandates are lifted.

Currently, all crew members and passengers over the age of six must wear a mask on all domestic flights and international flights to and from Canada.

The country’s approach is markedly different from that of the United States, where a federal mask mandate on airlines was scrapped in April, with mixed reactions from crew and passengers. Sara Nelson, president of the Association of Flight Attendants, America’s largest union for flight attendants, declined to take a position on the issue.

Learn more about Paddle Your Own Kanoo

This was written with the help of Rachel Phua, our latest Bill Greider Labor Reports Fellow. Alright guys, that’s all for today. Donate to help cover our travel costs to cover the presidential election in Brazil this fall. Please, if you can, sign up as one of our 702 returning donors today Keep sending ideas, tips, links and feedback to [email protected] Thanks again for the support and suggestions.