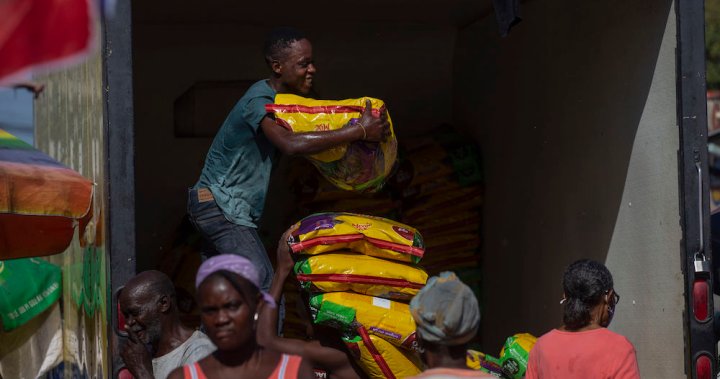 Sajjan announced the new funding at the start of an online meeting convened by Canada to help the Caribbean nation, which has been rocked by unrest since the summer when President Jovenel Moise was killed in a shooting at his home which also injured his wife.

“In line with our feminist international assistance policy, this means focusing on empowering Haitian women and girls,” Sajjan said in the opening speech of the online meeting where he was joined by the Prime Minister. Justin Trudeau and Foreign Affairs Minister Melanie Joly.

Canadian Ambassador to Haiti Says Security Needed Ahead of Elections

The new spending will include $12 million for humanitarian services and food security for people still feeling the effects of the 7.2 magnitude earthquake last August, a month after the country was rocked by the assassination of its president.

“These projects aim to increase women’s participation in the police and increase integrity. Because we all know that when women are involved, it improves peace and security.

In his opening remarks, Trudeau spoke of the need to improve security in the Caribbean nation.

“In order to meet Haiti’s humanitarian needs, we must also deal with the difficult security situation. The increase in violence only worsens the already precarious humanitarian situation,” Trudeau said.

Trudeau and Joly stressed the importance of strengthening the Haitian police in the face of rising violence and corruption.

“Clashes between armed gangs are worsening an already precarious humanitarian situation. They make it harder to get aid to the most vulnerable populations,” said Joly.

Joly is hosting the event online as she is in the midst of a three-country European trip to speak with leaders there about building up the Russian military on the Ukrainian border.

The US State Department said Thursday it looked forward to a productive meeting with Central American leaders and Joly on the future of Haiti. Assistant Secretary of State Wendy Sherman represented the United States at the meeting.

On Tuesday, US President Joe Biden said Los Angeles would host the Summit of the Americas in June, where leaders from the two continents and the Caribbean meet every three years to discuss shared priorities.

The causes – and potential solutions – of irregular migration will be high on the agenda.

Migrants from Haiti and a number of Central American countries regularly move north, putting pressure on the US southern border and creating widespread instability in the Western Hemisphere.

“Canada will host a ministerial meeting, and we look forward to strong engagement from countries, both in the Americas and around the world, in support of the Haitian people,” said Brian Nichols, Assistant Secretary of State for the Bureau of Western Hemisphere Affairs, Thursday.

Nichols was briefing reporters on Biden’s priorities for the Summit of the Americas, which is taking place in the United States for the first time since the inaugural event in Miami in 1994.

Montreal online radio journalist killed on the job in Haiti

“As we approach the summit, I expect that we will continue the efforts of nations in our hemisphere, as well as partners around the world, to support nations in the Americas that need more help, and Haiti. is obviously among them,” he said.

“I hope the people of Haiti will come together around a unified path that will put this nation back on the path to democracy and economic growth.”

Friday’s summit included representatives from the United Nations, the Caribbean Community or CARICOM, the International Organization of La Francophonie and the Organization of American States in what Global Affairs Canada describes as an attempt to coordinate security efforts and to foster political stability and sustainable development. .

Joly also confirmed Thursday that his French counterpart, Jean-Yves Le Drian, would be present, and that the duo “agreed on the importance of international collaboration to meet the challenges facing Haiti and Haitians. , particularly with regard to security issues”.

This report from The Canadian Press was first published on January 21, 2022.

How Americans think Joe Biden has done on their most important priorities after a year :: WRAL.com