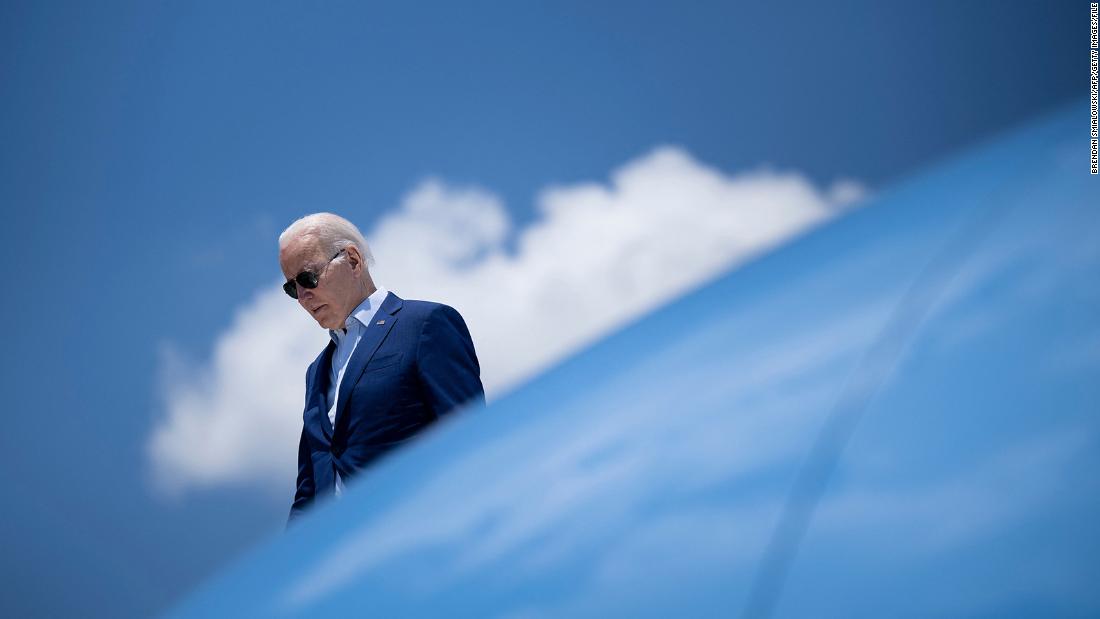 Mild symptoms and diagnostic protocol for Biden – a 79-year-old man at double risk of developing serious illness – will mean self-isolating and “working and resting” at the White House residence so far for the rest of the day, according to a senior administration official. This is the first time Biden has tested positive for Covid-19, and he last tested negative on Tuesday, per Jean-Pierre.

Biden wrote on Twitter on Thursday afternoon that he’s “doing great” after the positive test and said he called Pennsylvania politicians to express his regret at having to cancel a planned trip to the Commonwealth. The tweet was accompanied by an image of the president smiling at a desk, without a mask, in the White House residence.

“My friends, I’m fine. Thank you for your concern. I just called Senator Casey, Congressman Cartwright and Mayor Cognetti (and my Scranton cousins!) to let them know of my regrets. missing our event today,” he tweeted.

Biden tested positive for Covid-19 on Thursday morning and started taking the antiviral drug Paxlovid, which is available through a US Food and Drug Administration emergency use authorization for the treatment of Covid-19. mild to moderate in people 12 years and older who are at high risk for severe disease. It requires a medical prescription.

“As per (US Centers for Disease Control and Prevention) guidelines, he will self-isolate at the White House and continue to fully perform all of his duties during this time,” Jean-Pierre said in a statement.

Thursday marks “Day 0” of the President’s Covid-19 timeline – meaning he will be isolated until at least next Tuesday per CDC guidelines.

The president’s symptoms include “rhinorreha (or ‘runny nose’) and fatigue, with an occasional dry cough, which began last night,” according to a letter from the president’s physician, Dr. Kevin O’Connor. Biden did not have a fever Thursday morning, White House coronavirus coordinator Dr. Ashish Jha told CNN.

Biden first tested positive for Covid-19 in an antigen test Thursday morning as part of routine screening, and the positive result was later confirmed with a PCR test, his doctor said.

O’Connor also noted that the president met FDA criteria for use of the antiviral Paxlovid, adding, “I anticipate he will respond favorably, as most maximally protected patients do.”

Because of his age, Biden is at increased risk for more severe cases of Covid-19, although the CDC says fully vaccinated and strengthened older adults significantly reduce their risk of hospitalization and death.

Biden received his first two doses of the Pfizer/BioNTech Covid-19 vaccine before its inauguration in January 2021, its first booster in September and its second booster on March 30.

Jean-Pierre and Jha are expected to brief the press on the president’s diagnosis on Thursday afternoon.

The number of aides who occupy the White House residence will be reduced to the “bare minimum” in light of Biden’s positive Covid-19 diagnosis, an official told CNN.

And a mid-level West Wing aide who works close to Biden and was on his recent trip to the Middle East has also tested positive for Covid-19, according to two familiar sources. The person is not considered a close contact to the president and tested positive earlier this week.

Harris is expected to keep his regular schedule while Biden self-isolates. The senior administration official said there was no plan and there was no need to transfer executive powers to Harris – as was done last November for 85 minutes, when Biden was under anesthesia for a routine colonoscopy.

The first lady and the vice president said they both spoke to the president on Thursday after the diagnosis.

Jill Biden told reporters in Detroit earlier Thursday that she had spoken to the president and that “he’s fine. He’s feeling fine.”

The first lady, her spokesperson Michael LaRosa told CNN, will maintain her original schedule on Thursday, which includes a stopover in Georgia before traveling to WIlmington, Delaware. She’s also double-boosted, LaRosa said.

And on Thursday afternoon, Harris said at an event in North Carolina that the president “was in good spirits.”

“He works from the White House residence and when he spoke he was very happy that we were all together today,” she told her audience, adding that Biden had told her to “say hello to everybody”.

The next presidential trip canceled

A White House official told CNN that Biden’s planned trip to Wilkes-Barre, Pennsylvania, later Thursday for a speech on crime prevention has been canceled. The plan for an upcoming Democratic National Committee fundraiser in Philadelphia has yet to be determined.

Biden was also scheduled to travel to Orlando and Tampa, Florida on Monday, but is now expected to self-isolate.

Biden has stepped up his engagement with the public over the past year as the White House shifted its approach to the pandemic. On Wednesday, Biden traveled to Somerset, Mass., for a climate action leaders event, where he was seen shaking hands and waving at attendees in the outdoor crowd.

The president’s positive diagnosis comes less than a week after a trip to the Middle East, where he held meetings with world leaders in Israel and Saudi Arabia. Abroad, Biden has been seen shaking hands, bumping fists and kissing other leaders.

The White House is currently working on contact tracing for those who may have been close contacts with Biden, according to an official, since his positive Covid test. They plan to notify all close contacts on Thursday, including members of Congress and the press.

At least one congressman who was a close contact after seeing Biden in Massachusetts received a contact tracing call from the White House on Thursday.

The White House contacted the lawmaker’s office on Thursday afternoon, a source familiar with, advised the congressman to follow CDC recommendations on what an individual should do when determined to be a close contact. .

One of the recommendations, for example, for someone who is fully vaccinated and has been in close contact is to wear a properly fitting mask when around other people for 10 days from the date of the last close contact.

The White House prepared for this moment

White House officials have been preparing for months for what many saw as the inevitability of Biden going down with Covid.

A wave of cases — including among Harris, White House staffers and members of Congress — swept through Washington in the spring and summer. And as more of his top officials and family members contracted Covid, officials came to believe it was possible the president himself could fall ill, even as they took steps to protect him from the virus.

Biden last underwent an annual physical in November at Walter Reed National Medical Center. O’Connor wrote in a memo at the time that the president remained “fit for duty and fully carrying out all of his responsibilities without any exemptions or accommodations.”

Officials had a vague plan in place for the day Biden tested positive, including notifying the public when the tests were confirmed and releasing a letter from Biden’s doctor — both of which took place on Thursday.

Then-President Donald Trump posted a tweet at 1 a.m. ET on October 2, 2020, announcing that he and then-First Lady Melania Trump had tested positive for Covid-19. And Biden officials have been mindful of how the previous administration handled Trump’s diagnosis and intended to be more open about Biden’s condition.

Now, more than two years into the pandemic, Biden has become the second sitting US president to test positive for Covid-19. His mild symptoms so far stand in stark contrast to Trump’s diagnosis before a vaccine became available in 2020 – a Covid infection that led to Walter Reed being hospitalized for several days.

The president’s infection comes as Covid cases are on the rise again in the United States, driven by the most contagious virus strain to date – BA.5. More than a million people have died from Covid-19 across the country since the start of the pandemic.

The Biden administration is pursuing the Covid-19 public health emergency as it seeks new funding from Congress for treatments and vaccines. The public health emergency declaration allows many Americans to get free Covid-19 tests, therapeutic treatments and vaccines. Medicare has also relaxed the rules governing telehealth so that many more seniors can access these services when reporting. And states are not involuntarily de-enrolling residents from Medicaid upon reporting, in exchange for receiving more generous federal matching funds.

This story was updated with new developments on Thursday.