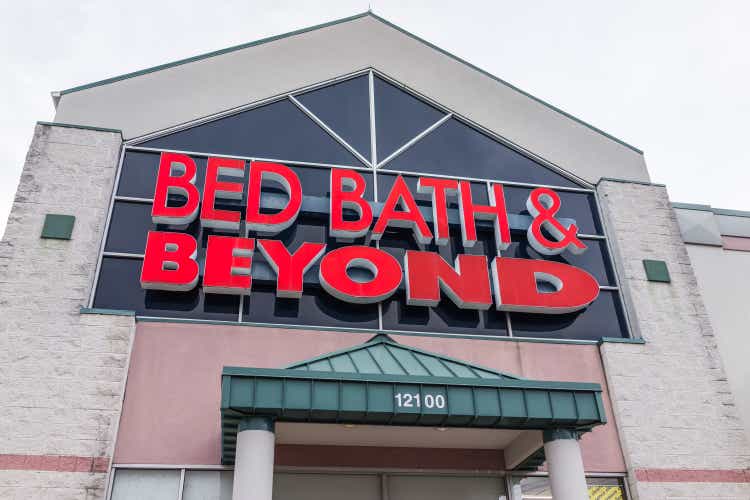 My favorite fantasy business merger of 2022 would be Bed Bath & Beyond (NASDAQ:BBBY) (Year-to-date losses: $724 million) and Beyond Meat (BYND) (Year-to-date losses: $198 million). Bed Bath & Beyond Meat would sell plant-based protein with household furniture to a dwindling clientele. In my opinion, the synergies may not be immediate, but in the end, you would only have to pay one set of bankruptcy lawyers.

Coming back to the real world, BBBY announced its quarterly results this morning.

The company currently holds 80 million shares and a market capitalization of $500 million. It has $1.7 billion in debt and $0.1 billion in cash for net debt of $1.6 billion. It thus has an enterprise value of 2.1 billion dollars, or 0.3 times its annual turnover.

Although the company liquidated some of its inventory by discounting this quarter, it still remains uncomfortably high at 4.5 months of sales. Surprisingly, the company continues to invest in capital expenditures ($122 million) beyond depreciation ($71 million). This may be a sign that he is aggressively capitalizing his expenses.

Analysts expect the company’s revenue to stabilize next year, with continued losses. The company has not offered a credible path to profitability and is focused on raising funds to finance its operations.

The company missed a golden opportunity to issue hundreds of millions of dollars in stock amid the short-lived meme frenzy in August, when its stock rose to $30. Obviously, the management seemed asleep at the switch on their 1000 thread count (pro tip: thread count isn’t everything. Above 500 there really isn’t any benefit). But they didn’t issue any stock, while meme lord Ryan Cohen took the opportunity to dump his stake in the company. A few weeks later, after the stock came back to earth, they woke up from their slumber and decided to bid at the market. To date, the company has sold 3 million of the 12 million shares that were to be sold.

Unfortunately, I believe the chances of a turnaround here are slim. I expect the losses to continue and a default at some point. The company has bonds maturing in 2024 and will try to refinance them with new debt or equity. If he is unable to do so, a bankruptcy filing will be required, rendering the shares worthless.

In a bullish case, the company would be able to generate a 2% margin on $6 billion in annual revenue for an annual operating profit of $120 million per year. After interest expense of $70 million a year, shareholders would have $50 million left. The company could use its accumulated losses to protect taxes, which would result in earnings per share of $0.60 per share. A multiple of 15 times that would give a fair value of $9 per share for a 30% upside from the current stock price of $6.80.

Short interest and cost of borrowing

I wouldn’t recommend shorting a stock that already has high short interest, with the possibility of a short squeeze driving the price much higher. Nor would it be economical to pay an exorbitant cost of borrowing that potentially absorbs all the downside on the equity side.

BBBY has a high short interest at 38% of the shares outstanding. The stock is hard to borrow with a borrowing cost of 13% per year, although your broker may charge a different rate. It certainly eats away at any profit you might make on a short position with the stock going down.

I recommend that investors avoid buying stocks and selling their holdings. For those who want to take the other side, rather than shorting the stock, I recommend selling calls to generate income. December $15 strike calls can net you $0.50. Keep in mind that these can lead to significant losses in market value if the stock spikes. The risk is somewhat mitigated by the fact that the company is in the market by selling its shares.

Seeking Alpha’s quantitative rating is surprisingly positive for the company. It has a composite rating of 3.07, which equates to a take. It gets an A+ for valuation and an A for growth. Digging deeper, it appears that the valuation score is due to the company having a low EV to Sales ratio, while the profitability metrics are masked (perhaps because they are negative, but that doesn’t should not be the case). The growth rating is more difficult to understand, with a few F factor ratings, a D and a B for investment growth, resulting in an A for the total.

Wall Street analysts are more negative, with a combined rating of 1.76, which equates to a sell. Their price targets have followed the stock price lower.

Risks are moderate and manageable

Shorting stocks and selling naked calls is inherently risky, as the potential losses are theoretically infinite. I would recommend shorting stocks only when paired with a long portfolio.

There is always a possibility of a short press causing the stock to rise. However, with interest rates rising, I consider the chances of this happening on an extended basis not very high.

At a market capitalization of $0.5 billion, an acquisition by another company or private equity is certainly feasible, but an acquirer will face significant operating losses.

The gap between the company’s intrinsic value and the stock price could widen over time.

The company’s operations could improve significantly as it would start generating huge profits.

Writing a short thesis on an action on a public forum is an invitation to blowback for employees and holders of the action. I welcome respectful comments from eponymous readers. If you are a shareholder or an employee, it is better to direct your energies towards the profitability of your company.

‘Biden’s admin is not doing his job’