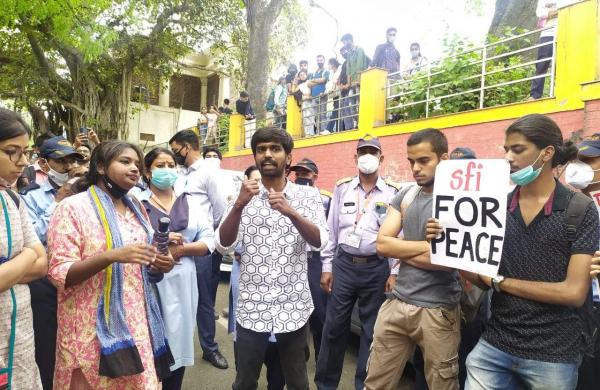 Students belonging to SFI (Federation of Students of India) from Ambedkar University Delhi (AUD) had staged a peace march on 21st April 2022 to show their solidarity with those evicted from their homes in Jahangirpuri, Delhi, and to protest the general spread of violence in the region. The march for peace, however, takes the form of a violent confrontation between the university authorities and the students.

While university authorities claimed that holding demonstrations over political issues was not allowed on campus, they were also against the posters the students had prepared to organize the march. Anil Sethumadhavan, Chairman of SFI AUD, said that while they were organizing the peace march, everything was fine at first. But then the clerk, overseer and other members of the administration came to disrupt their march, stating that the march had to be stopped because such a thing was not allowed. “We were ready to comply and had decided to just hold a rally and a discussion in front of the library. But they also had problems with the posters,” Anil said.

He explained that the authorities had tried to tear down the posters and even said that the student unions were not intended for the university ecosystem. “Take down the posters and banners. No political posters or banners are allowed. Organizations cannot hold rallies,” Anil recalled, quoting authorities. He also explained, “Confrontations like these are nothing new and have been happening for years. But this time, the authorities resorted to mistreatment. And that is not acceptable. He also said that the students had a calm conversation with the supervisor and the registrar, but they suddenly started bullying the students.

Taken by surprise
Commenting further on the incident, he said two students were knocked to the ground. “And many students who had participated in the march are suffering from severe body pain, which has made their parents extremely worried,” he added. He also said that everything was recorded on a video shot by the students at the time of the incident, in order to preserve the veracity of their statement against the university authorities.

“We were surprised and traumatized,” Anil said, referring to the treatment they received from authorities. “If a university tries to reduce or completely ban student organizations, it’s scary for the whole student community,” he said. “They didn’t even agree that we should organize a discussion in front of the library, against our posters. But we could not grant their request to throw away our posters, mainly for fear that if we listen to them every time, they will continue to use the power of violence against us. It has been going on for a long time,” he added.

The peace march was a method for students to show their solidarity with minorities. As for what the university said about the unfortunate violence, Anil said, “They didn’t say anything. It also did not affect the functioning of our university life. So even we haven’t taken any action yet. But we are planning to approach the Delhi government, relevant officials and ministers in particular, and get them to take action against members of the university administration. We have also planned other movements, but nothing specific. Nevertheless, we have predicted a Twitter storm today evening (April 23). »