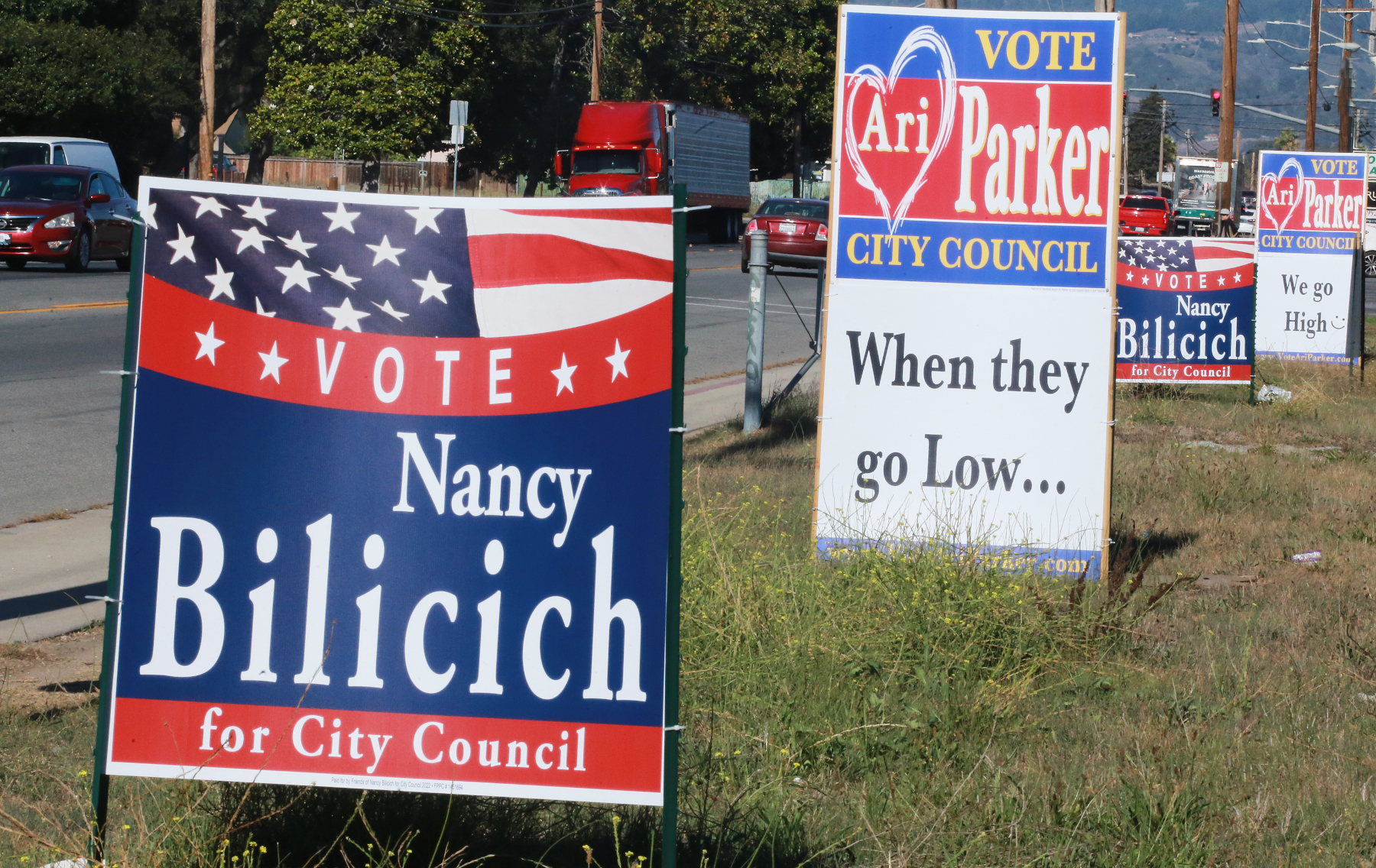 Fred Keeley has had by far the most campaign contributions among candidates for mayor and Santa Cruz city council running in the upcoming Nov. 8 general election.

But Keeley’s biggest contributor to his candidacy has been himself. The former state legislator, county supervisor and treasurer donated $15,000 of his own money to his campaign committee in the form of a Sept. 27 contribution. And he also loaned himself $12,000 over three transactions in July.

By comparison, her competitor Joy Schendledecker, a newcomer to local politics, raised just over $13,000 for her campaign.

Here’s a look at other City Council races across the county:

A strange signage situation in Watsonville has caught the attention of voters in District 7.

On the east side of town, near the Staff of Life Natural Foods grocery store, a pair of signs for current District 7 City Council representative Ari Parker appear to under-tweet two signs for District 7’s candidate, Nancy Bilicich, with the quote made famous by First Lady Michelle. Obama: “When they go low, we go high.”

Bilicich, who was first named to city council in 2009 and was re-elected twice before leaving office in 2018, says she has ‘no idea’ why her opponent included the quote under her signs typical.

“One day they just appeared,” says Bilicich, who adds that she has nothing more to say.

Parker, who is currently mayor, did not respond to questions by email until press time on Tuesday.

Steve Trujillo, who unsuccessfully ran against Parker in 2018 and is now on the Cabrillo College board of trustees, said at a recent city council meeting that he would not vote for either candidate because smear tactics on both sides. Instead, he said, he planned to vote for himself as the write-in candidate.

The decision not to run for office in November was a difficult one, Capitola Mayor Sam Storey said. While this year will likely serve as his swan song of local politics, the longtime elected leader leaves the door open for an unlikely comeback.

“As the saying goes, ‘never say never,'” Storey wrote in an email. “We can never know what the future holds and we must stay open to new opportunities while we still can.”

For now, however, Storey is saying goodbye to politics to focus on family. His youngest daughter was recently accepted to the University of Washington and he helped her transition to Seattle this fall.

“I believe voters are entitled to a fully engaged and committed candidate,” Storey wrote. “I have reached the age where I realize that my time is a non-renewable resource and it is better to use it wisely.”

When he leaves office in December, Storey will have served on council for 12 years – 2006-14 and 18-22 – and served as mayor three times. The current term as mayor, he says, has arguably been the most rewarding, as he has seen the city emerge from the mini-recession caused by the pandemic.

“Capitola faces challenges with the Capitola Mall project still stalled, mitigating the impacts of rail/trail corridor use and lack of affordable housing,” he wrote. “However, I believe the current board, newly elected board members and staff are capable and have the tools to meet these and other challenges.”

Valley of the Scotts

Council member Derek Timm has teamed up with recording plug-in company executive Allan Timms in an effort to unseat Vice Mayor Jim Reed, whom Timm has fought several times over the course of the last year.

Timm and Reed have been increasingly at odds since the former, who served as mayor last year while Reed served as vice mayor, nominated Lind for mayor in December in his place. Then in May, when Timm tried to fast-track a vote on a policy to raise the Pride flag for most of June, Reed challenged the city’s “transparency,” with staff asking for a majority of the advice. to indicate that they supported the movement.

When this policy was debated, Reed raised concerns about expanding the flags the city can fly (although Reed introduced an unsuccessful motion that sought to enshrine the rainbow flag – and no other – like a new Scotts Valley banner would be able to raise).

Reed said he fears the policy will be used by groups such as the Ku Klux Klan to force the city to fly their flags. Reed eventually voted with the rest of the board to support Timm’s motion for a new ceremonial flag policy.

But the evening gave Timm the opportunity to cast Reed in a homophobic light, which Reed says GT Is not fair. He accuses Timm of not wanting to consider different ways to achieve the same goals, pointing out that he lobbied for the rainbow to become an official symbol of Scotts Valley (which Timm voted against).

“It is not credible in my opinion to say that putting the Pride flag on the same level as the American flag is not favorable to LGBT issues,” said Reed, chief of staff to the incumbent mayor of San Jose. , Sam Liccardo.

Timms moved to the United States from Britain in 2014. He says his interest in participating in local government was sparked by the citizenship process. He became American earlier this year.

Timms says the Pride flag debate was one of the catalysts that made him pull the trigger to run for office.