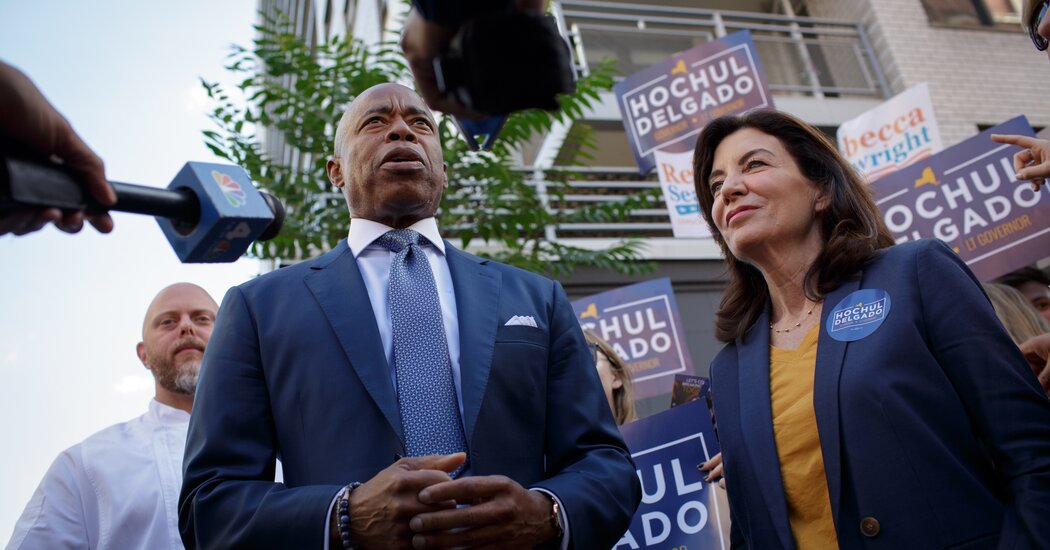 Hours before Mayor Eric Adams held a press conference on Wednesday to claim that a “crazy and flawed system” allowed repeat offenders to continue to be arrested and then released without bail in New York, Governor Kathy Hochul launched a sort of preventive strike. .

Four months ago, the governor and state legislature tightened New York’s bail laws for the second time in three years, making more crimes eligible for bail and giving judges a additional discretion to consider both the seriousness of a case and an accused’s recidivism when bailing. .

But the mayor, dissatisfied with the city’s crime rate, put the ball back in her court again.

At her own press conference, the visibly irritated governor discussed recent revisions to the bail law. “I don’t know why everyone is intentionally ignoring this,” she said. “But people are out there and, you know, people are trying to make political calculations based on that.”

She did not name Mr. Adams, a fellow Democrat, or, for that matter, his Republican opponent in November, Rep. Lee Zeldin. But Mr. Adams and Mr. Zeldin hammered the governor on the state’s approach to bail and made similar statements about how bail laws have affected crime rates.

Mr. Adams, who has based much of his city platform on crime reduction, even used physical props on Wednesday to illustrate his point. He made his remarks next to billboards detailing the crimes of individuals he said were among the worst repeat offenders in the city. (Mr. Adams said his lawyers have prohibited him from disclosing the names of the individuals.)

The mayor and his police officers have also released a litany of statistics they say demonstrate the seriousness of the problem.

“Our recidivism rates have skyrocketed,” Adams said. “Let’s look at the actual numbers. In 2022, 25% of the 1,494 people arrested for burglary committed another crime within 60 days”.

In 2019, state lawmakers rewrote the bail law so fewer people awaiting trial end up behind bars because they couldn’t afford to post bail. Law enforcement furiously fought the law, the implementation of which came at the start of the pandemic, during which gun crime increased in cities across the country.

After a flurry of criticism, lawmakers agreed to a series of changes in 2020 that added two dozen crimes to the list of serious charges for which a judge could impose cash bail.

But Mr Adams said tougher revisions were still needed. He called on the state to allow judges to consider dangerousness more frequently when deciding to set bail and to ensure that some juvenile cases proceed in criminal court rather than family court. .

He insisted Wednesday that he was not trying to target the governor, his ostensible political ally whom he endorsed less than two months ago. Ms. Hochul, likewise, chose to highlight the programs she and the mayor had worked on together, and how they were “in sync”.

The mayor and governor were keen to project political courtesy, a new tone after years of public bickering between their predecessors, Governor Andrew M. Cuomo and Mayor Bill de Blasio.

But the upsurge in crime and Mr. Adams’ focus on the issue threatens to put a strain on their relationship.

Murders and shootings are down slightly this year, but major crimes, including burglaries, are up more than 35%.

Mr. Adams, a former police captain, sometimes turns to hyperbole to describe the situation. In May he said he had never seen crime at these levels, despite being a police officer in the 1980s when crime was much, much higher. Today’s murder rate, for example, is roughly comparable to that of 2009, when Michael R. Bloomberg was mayor.

But Mr. Adams ran for office on the assumption that he would reduce crime, and his political imperatives threaten to clash with those of Ms. Hochul, who has every interest in throwing herself so firmly in control of the situation.

“It’s sad that Mayor Adams has joined the ranks of the right-wing that so crudely demagogues this issue,” Mr Gianaris said. “He should focus less on deflecting his own responsibility for higher criminality and more on taking action that would actually make New York safer.”

When Mr. Adams pushed for the second wave of changes to the law earlier this year, Ms. Hochul embraced the cause as her own, expending significant political power to do so. The effort was met with fierce opposition in the Legislative Assembly, with a lawmaker going on a hunger strike to oppose the Hochul plan.

And while Ms. Hochul was ultimately successful in getting amendments, the effort left a stain on her relationship with the Legislative Assembly.

Among other things, the 2022 revisions made more crimes eligible for bail and gave judges additional discretion to determine whether a defendant is charged with causing ‘serious harm’ to someone. , or has a history of using or possessing a firearm. The new changes have not, however, imposed a standard of dangerousness Mr. Adams is now insisting on, which criminal justice advocates say is prone to racial bias.

Mr. Adams’ decision to push for even more changes has created an opening for Mr. Zeldin, who last week held a press conference to voice his support for Mr. Adams’ calls for a special session to address the bail reform.

“I think judges should have the discretion to weigh dangerousness and flight risk, prior criminal records and the seriousness of the offense against many more offences,” Zeldin said.

A poll this week found Ms Hochul had a 14-point lead over Mr Zeldin – “an early but certainly not insurmountable lead”, according to the Siena College pollster.

On Wednesday, the mayor was careful to insist that he and Mr. Zeldin were not, in fact, joined at the hip.

“We must have a broken hip because he clearly doesn’t understand,” Mr. Adams said of Mr. Zeldin. “He voted against every responsible gun law in Congress.”

The Legal Aid Society, the leading provider of legal services for poor New Yorkers, said in a statement Wednesday that the Adams administration was trying to “pick a handful of cases to mislead New Yorkers and convince them that law reform the surety is responsible for all the ills of society.”

Ms Hochul was more circumspect in her criticism, instead focusing on recent revisions to bail laws. She said the changes gave judges and district attorneys “the tools they needed” to improve public safety and suggested those not using them should respond to voters.

“I believe in accountability at all levels,” she said. “And you know, people can’t just say they don’t have something when they have it.”