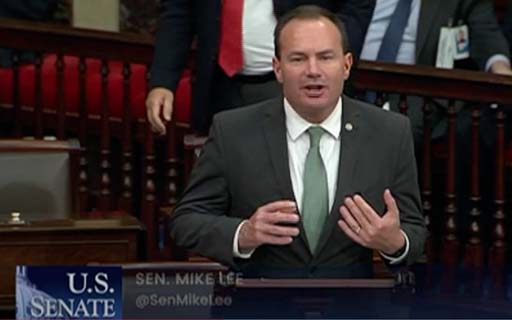 In an unusual Senate session on Saturday, Sen. Mike Lee (R-UT) argued the merits of his amendment to the Cut Inflation Act that proposed a 10% increase in supplementary payments in lieu of taxes for Utah cities and counties. The amendment was ultimately defeated by Senate Democrats in the marathon “vote-a-rama” session (Image courtesy of CSPAN).

WASHINGTON, DC — As the U.S. Senate slowly moves toward the seemingly inevitable passage of the $740 billion Inflation Cut Act this weekend, hundreds of Republican-proposed amendments are being dropped.

Among them was a measure proposed by Sen. Mike Lee (R-UT) that would have instituted additional payments in lieu of taxes for Utah cities and counties over the next 10 years.

“For too long,” Lee said, “the federal government has wronged local governments who have to waive property taxes due to large tracts of federal land within their borders.

“Locals have suffered deep losses in revenue in a system that is neither fair nor just. My amendment…to the so-called Inflation Reduction Act…would have helped to alleviate this imbalance.

In the equally divided Senate, that $740 billion proposal was seemingly dead, until Senators Joe Manchin (D-WV) and Kyrsten Sinema (D-AZ) suddenly reversed their positions this week.

Their endorsement of the proposal set up marathon Senate sessions this weekend, with the bill likely to pass in a reconciliation vote by all 50 Democratic senators, with Vice President Kamela Harris breaking the tie expected.

Going into the ‘vote-a-rama’ amendment on Saturday, the text of the Inflation Reduction Act proposed to make a down payment on deficit reduction to fight inflation; allow Medicare to negotiate lower prices for prescription drugs; extend Obamacare until 2025; and investing in household energy production to curb climate change.

But Republicans say the backroom deal brokered by Sen. Chuck Schumer and Manchin will actually raise taxes for nearly all Americans.

“No wonder (President Joe Biden) wants to rush,” writes the Journal. “The more Americans learn about this tax-and-spend behemoth, the more they won’t like it.”

Here in Utah, the federal government owns 66.48% of the total land. Payments in Lieu of Taxes (PILTs) are federal allocations to local governments to compensate for property tax losses due to non-taxable federal lands within their boundaries.

Lee says the LTIP payments, however, are far lower than what the local government might expect to collect in property taxes.

“To consider PILT payments as tax equivalents for Utah cities,” says the outgoing senator, “they would have to be 262 times larger.”

Lee’s amendment would have increased LTIP payments by almost 10%.

Due to the unprecedented inflation caused by the Biden administration, he argues, local government needs these lost revenues more than ever.

“It’s a shame that Democrats, especially those whose constituencies stand to benefit from this amendment, voted to continue to mislead Americans,” Lee said.

Once the Inflation Reduction Act is passed by the Senate, its text will need to be approved by members of the US Representatives before being sent to the President for signature.

House Speaker Nancy Pelosi (D-CA) is expected to call members back from their August recess to vote on the Cut Inflation Act as early as mid-August.