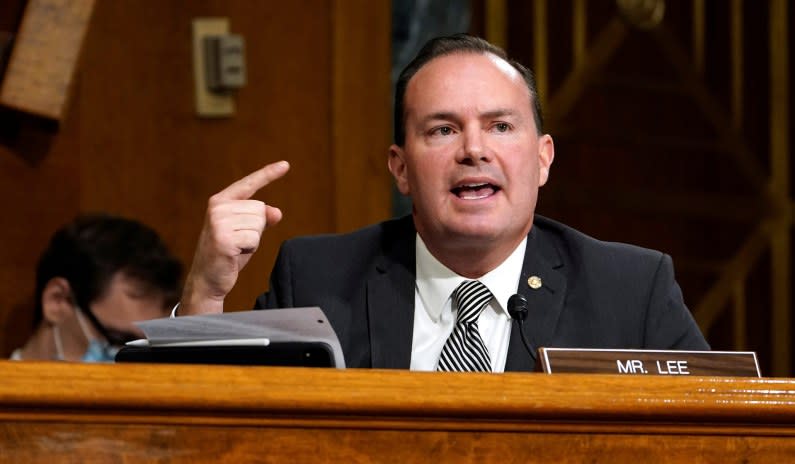 In a hearing before the Senate Judiciary Committee on Tuesday, Republican Senator Mike Lee grilled Homeland Security Secretary Mayorkas for failing to defend border patrol agents against the disproved charge that they “whipped” Haitian migrants in Del Rio, Texas in September.

Officers were photographed turning the reins in an attempt to drive the fleeing migrants away from their horses. White House Press Secretary Jen Psaki and other prominent members of the administration joined Congressional Democrats in condemning border patrol agents as inhuman and racist as images went viral on the media. social networks.

Lee argued that the unfounded allegation, which started in the press and was fueled by members of the Biden administration, has hurt the morale of border staff as he struggles to fight the biggest increase of illegal immigration in the country’s history.

“Why the hell didn’t you stand up for them?” Has anyone in your department ever noticed how split reins are used when riding? Lee asked Mayorkas indignantly.

“Number one: I put in one hundred percent and I’m incredibly proud to do it. Number two: I’m on the side of the men and women in our department from start to finish, and I won’t prejudge the facts before… ”Mayorkas replied before Lee intervened.

“Did you defend them when they were attacked for flogging people, which they weren’t? Asked the senator.

At the end of September, before Mayorkas gathered all the evidence, he condemned the agents and said their actions illustrated the “Systemic racism” adding that it does not “reflect who we are, who we aspire to be for the integrity and values ​​of our truly heroic staff in the Department of Homeland Security.”

Lee called the secretary’s sentencing of the officers “nothing less than a morale booster,” especially since it came as Border Patrol officers struggled to cope with an unfolding humanitarian crisis. was taking place in Del Rio.

“If you want to maintain or get operational control of the border, which you don’t have now, that’s not a way to get there,” Lee said.

Lee’s questions came after Senator Chuck Grassley urged Mayorkas on recent reports that the Biden administration could compensate for migrant families separated under the Trump administration’s ‘zero tolerance’ policy with up to $ 450,000 per person in legal regulations.

Mayorkas dodged the question and referred the questions to the Justice Ministry, which he said will rule on these. federal tort claims.