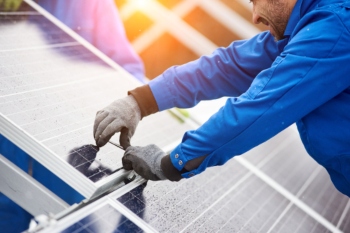 The survey of 100 MPs, commissioned by the MCS Charitable Foundation, found that more than half (56%) agree that a green energy retrofit should be a priority for the 29 million existing homes from the United Kingdom.

The poll also found that more than three-quarters of MPs (77%) believe small-scale renewables, such as solar PV, solar thermal and heat pumps, should be incorporated into all new building properties. from 2022.

The abolition of VAT on all national renewable energies and energy efficiency measures for 10 years was also supported by almost half of the MEPs questioned (46%).

Less than half of MPs polled believe the government is doing enough to meet net zero targets and that there was support for new regulations requiring all new homes to meet this standard by 2023.

Currently 20% of carbon emissions, mainly from gas boilers, are produced by the existing building stock in the UK.

To meet the UN’s carbon emissions targets, homes must be fitted with renewable heat technology at a rate of nearly two per minute through 2050, according to the Climate Change Committee, the statutory body advising the government on the climate crisis.

“If the government is serious about meeting emission reduction targets, the decarbonization of our current and future homes urgently needs to be on the political agenda, backed by strong legislation,” said David Cowdrey, director of external affairs at MCS.

“Less than half of the deputies polled believe the government is getting there, sending a clear message that they must take decisive action, with the Treasury pledging to fund, to accelerate the home heating revolution.”

Responding to the report, Cllr David Renard, spokesperson for the Local Government Association (LGA) for Housing and Environment, said: â€œAs the COP26 agreement has recognized, local communities have a fundamental role to play. play in the fight against climate change.

â€œWe have presented ambitious proposals to ensure that councils are given the appropriate powers and investments to renovate more than 1,000 homes per day with low-carbon efficiency measures by 2030, which could reduce energy bills. energy of almost Â£ 700 million per year. This could be an important step towards the government’s ambition to reach net zero.

â€œTargeting the deployment of heat pumps on municipality-owned inventory would also provide certainty and confidence in the market and help develop the supply chain. “