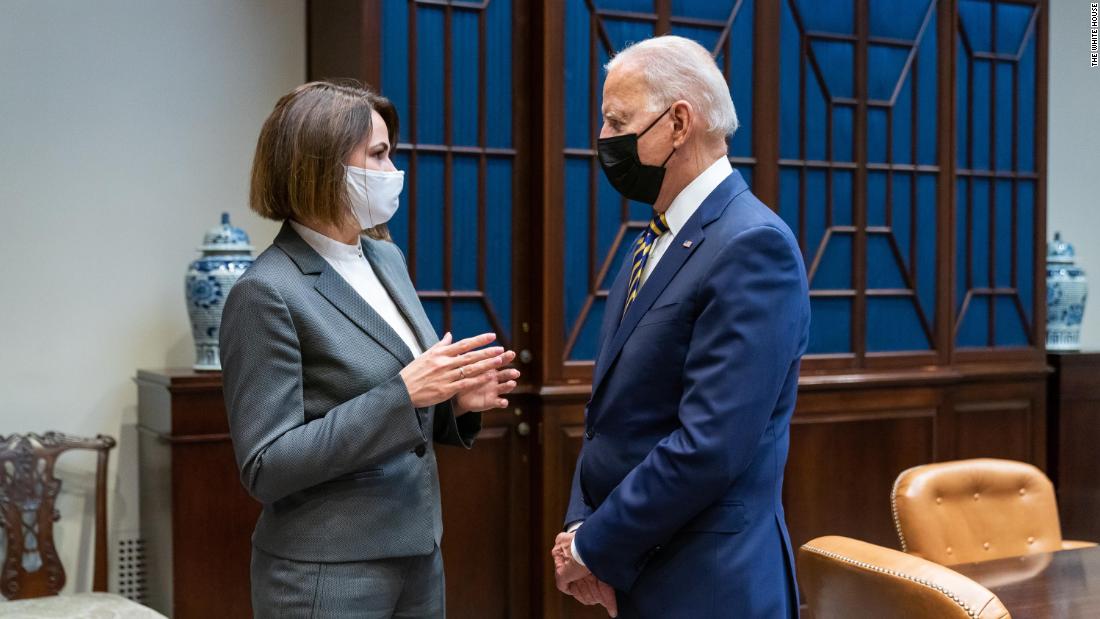 A congressional source told CNN the actions were due to be announced on Monday, marking the first anniversary of elections in the eastern European country, which the international community condemned as fraudulent.

The target of the new sanctions was not immediately clear, but Belarusian opposition leader Sviatlana Tsikhanouskaya said during a briefing with reporters in Washington, DC, that during her visit to her meetings in Washington, DC, last month, she gave the Biden administration a specific list of targets she would like to see sanctioned.

Tsikhanouskaya told reporters that she had provided a list of companies monopolized by the Lukashenko regime “and its cronies,” including the potash company Belaruskali, as well as oil, timber and steel companies.

The Belarusian opposition politician called on the administration to adopt tougher sanctions, saying she believed the first installments were more symbolic and “moral sanctions.”

â€œThey haven’t hit the regime and I think we’ve really wasted time,â€ she said. Tsikhanouskaya said the sectoral sanctions imposed by the European Union following Lukashenko’s forced hijacking of a Ryanair flight and the arrest of a Belarusian dissident journalist on board were strong. The United States could follow this policy, she said, “and also consider the possibility of imposing sectoral sanctions on Russia,” she said.

CNN has contacted the State Department, the National Security Council and the Treasury regarding the expected actions.

Tsikhanouskaya this week called on the international community “to send a signal of solidarity with Belarusians fighting for democracy and freedom” on August 9, the anniversary of the disputed elections that sparked massive protests across Belarus.

Democratic Senator Jeanne Shaheen of New Hampshire and GOP Senator Roger Wicker of Mississippi on Friday announced the launch of the Free Belarus Caucus, which â€œwill push for democracy in Belarus, including free and fair elections; fight for free media and the protection of journalists; and support neighboring countries, such as Lithuania and Poland, in their efforts to help the Belarusian people, â€according to a press release.

The administration announced sanctions in June as part of a coordinated response with the United Kingdom, Canada and the European Union to the forced landing of the Ryanair flight by the Lukashenko government, as well as to the “crackdown.” continues â€in the former Soviet state.

US Ambassador to Belarus Julie Fisher told Senate lawmakers in early June that the administration was “focused on a new executive order as soon as possible.”

“You are absolutely right. 2006 was a long time ago,” she said in response to committee chairman Senator Bob Menendez, who referred to the Presidential Decree on Belarus issued by the President. of the time, George W. Bush.

â€œIt was a very different world, and there’s room for us to do a lot of things with a new Executive Order. It’s an ongoing effort,â€ Fisher said at the time. “Our goal remains that we are there, we are focused on promoting accountability for individuals and entities who are responsible or complicit in the regime’s violent crackdown on civil society and these human rights violations. We will therefore continue. to bring new authorities and new pressure tools to bear. “

Lukashenko, who has been shunned by much of the international community and who has been under US sanctions since 2006, has severely cracked down on protesters and journalists in the country. CNN reported this week that a possible prison camp for political dissidents may have been built about an hour from the capital Minsk. Belarusian Olympic sprinter Kristina Timanovskaya has defected to Poland after alleging that representatives of the national team tried to send her back to Belarus against her will after criticizing sports authorities.

The many facets of Gautam Adani