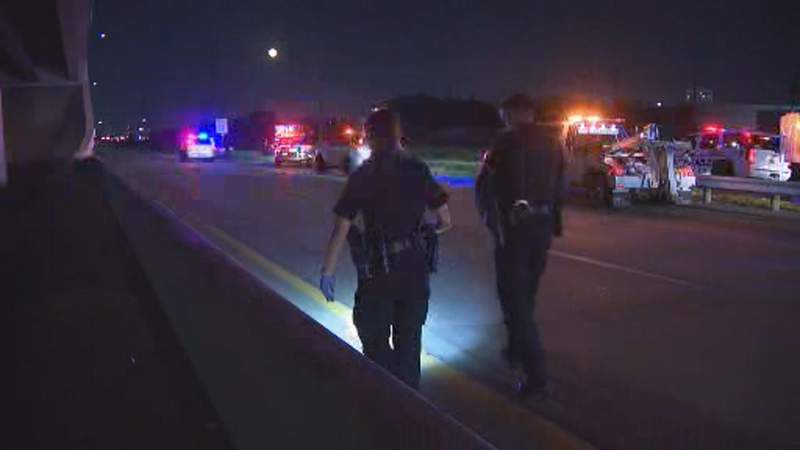 Here are things to know for Tuesday, September 21:

One officer died and another was injured after a shooting in northeast Harris County.

The incident happened around 7:30 a.m. at the Timber Ridge Apartments on Aeropark Drive near Crosswinds Drive, authorities said.

Upon their arrival, Finner said a woman suspected of having some sort of relationship with the suspect opened the door. At this point, Finner said the suspect immediately got out and opened fire on the officers.

2. Man dies after being shot while driving on Westpark Tollway, police say

A man was killed Monday night after being shot while driving on the Westpark toll freeway, according to the Houston Police Department.

The shooting was reported at around 7:24 p.m. in the 8800 block of Westpark Tollway, between Gessner and Fondren roads.

Police said the man was driving east when he was shot. He was taken to a nearby hospital where he later died.

3. Search for suspects underway after 14-year-old was shot dead in Kingwood, MPs say

An investigation is underway after a 14-year-old boy was shot and killed in Kingwood on Monday, Montgomery County Sheriff’s Deputies said.

MPs said that at approximately 8:20 p.m. they were sent to N. King Mills Lane block 25000 for reports of gunfire.

During the investigation, MPs said they learned that a woman was walking on N. Kings Mill Lane when she heard several gunshots near the intersection of Pauldron Drive. According to investigators, the woman said she also saw two men fleeing the area.

According to the deputies, the woman continued her walk when she came across an unconscious 14-year-old boy lying on the sidewalk, apparently with gunshot wounds. MPs said the woman called authorities.

4. Governor Greg Abbott and local officials are waging several legal battles over mask warrants. Here’s what you need to know.

Texas Governor Greg Abbott is locked in several legal battles with cities, counties and school districts over their offers to require masks in public schools.

In an executive order in May, Abbott banned local governments from requiring people to wear masks.

But as the highly contagious delta variant of COVID-19 spread across Texas and the state’s vaccination rate stagnated, several public school and local government officials felt badly about it. comfortable with Abbott’s order – especially when schoolchildren too young to get vaccinated have returned to classrooms.

Some local officials challenged Abbott and still issued mask warrants for schools. Others sued the state on Abbott’s orders. As dozens of legal battles continue, parents in Texas have found themselves in confusion over whether their children should dress up in school.

5. Houston Texans QB Tyrod Taylor could be out for up to a month, KPRC 2 confirms

The Houston Texans could be without starting quarterback Tyrod Taylor for up to a month, KPRC 2’s Randy McIlvoy confirmed.

An NFL source told McIlvoy that Taylor is suffering from a major hamstring injury that could prevent him from playing the next four games, with future evaluations to determine a more precise schedule.

Taylor sustained a hamstring injury in the first half of Sunday’s game against the Cleveland Browns – a game the Texans lost 31-21. It came after Taylor started the game 10-11 on his passes for 125 yards with a touchdown in the air, and also ran for a 15-yard rushing score to tie the game at 14-14. Rookie Davis Mills replaced injured Taylor and finished with a touchdown pass and an interception.

Explained: Why is the BJP government in Karnataka facing a political storm over an SC order on illegal religious structures?